Have you ever wondered why the letters on any keyboard (of your PC, tablet or laptop) aren’t situated in alphabetical order? The location of letters goes back to 19th century typewriter. The principle of its work is very simple. When you push the button with the letter, it activates a small type lever with a cast matrix of this letter on its top. This type lever hits the ribbon soaked with ink, which occupies the position between lever and paper. This is how we get the print. While typing a text, levers hit the paper one by one.

First typewriters invented by Christopher Sholes had the alphabetic arrangement of letters within two rows. Only capital letters were allowed while numbers 1 and 0 were printed with the help of I and O. It was acceptable at the beginning, but later these typewriters became problematic since the speed of typing grew. Some levers couldn’t make it in time to take their initial places so fast, so they were clinging one another. In an attempt to separate them, one could break the whole mechanism. It happened because there are many neighboring letters in the English alphabet which are used more frequently than others (e.g. combinations of p-r, n-o). As a result closely situated keys were pushed one after another that caused clinging and jam-up. 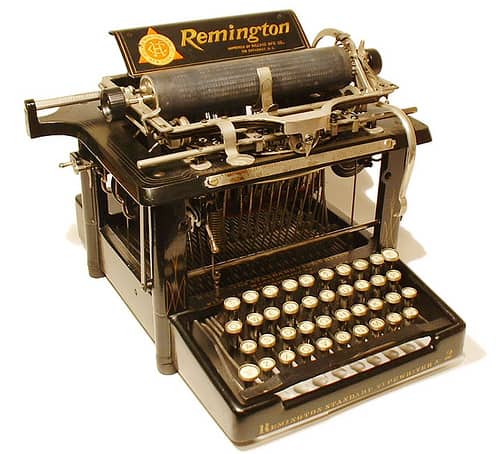 Typewriter manufacturers decided to invent a keyboard with neighboring letters separated from each other so that they could be far enough for index finger (as previously people printed with first fingers only instead of using ten finger method). This is how QWERTY (first five letters in the upper row of keyboard accordingly) appeared. QWERTY came to modern computers, even though the problem of clinging is absolutely impossible for computer keyboard as they even don’t have levers.

It has to be mentioned that location of letters on QWERTY is far from rational. Scheme introduced by Arthur Dworak, professor of Washington University, is much more convenient. There the most frequently used letters are put to the upper and middle rows. All vowels are under the left hands while consonants are under the right.

Hand pressure becomes balanced. Let’s look: QWERTY makes your fingers cope with 7 km distance per 8 hour working day. At the same time Dworak’s keyboard reduces it to 2 km. Consequently, speed of typing on Dworak’s keyboard is higher as well. With such improved keyboard you won’t have to loll out your tongue to be the huge lol:

Typewriters were pushed out with the appearance of computers in 40’s of previous century. It gave a chance to return the alphabetic order layout. However, people who worked with typewriters now would have to get accustomed to the new arrangement. Companies didn’t want to pay money for this re-learning of their employees, so the old layout has remained by present days.

In pre-computers era students were not required to do their homework with typewriters, they did everything by hand. The main reason is that typewriters were rather expensive and not so common as, for example, laptops are today. So major part of students body had no access to this automatized substitute of hand writing. Nowadays up to 90% of all written homework is typed on computers. And there are lots of obvious advantages, for example copying homework is a mere Ctrl+C Contrl+V thing instead of hours spent over someone’s hand-written assignment first deciphering it and then copying down. But, hey, everyday is not Sunday, and teachers had also adopted latest technological achievements in their anti-cheating measures. Keep that in mind when you’re going to cheat at class or copy someone’s homework.