We cannot imagine a life of a common individual without such a wise device as clock. Yes, you can object, that  not everyone wears watches these days. Yet everyone owns mobile or smartphone, and one surely has a clock! In fact, the need in time measurement appeared ages ago. Naturally, the question arises: what’s the most precise clock? To answer this, at first we need to understand what it means to measure. In fact, we simply compare one quantity to another, which is called the unit of measurement. The standard measures of time are likely to be based on constant periodical processes of high accuracy.

Originally the Earth rotation used to be the one and the most famous periodical process. The daytime was measured by noticing from the observation point one of the two celestial bodies passing the meridian plane. However, constituent day (“sun day”) appeared to last 4 minutes longer than equinoctial day (“star day”). It is inconvenient to use star time since our whole life is connected with the change of day and night, thus, with the sun day. Nevertheless, it is difficult to state the exact duration of the constituent day. Firstly, the Sun is “too big”. Secondly, solar emission heats and deforms measuring instruments. And the last but not least, the length of the sun day varies as a result of the Earth’s speed change during its rotation.

In 1582 Italian scholar Galileo Galilei showed that pendulum (certain load on a slender bar) swings with a steady speed. Moreover, he proved that oscillation velocity depends not on the load weight, but on the length of that very pendulum. This is an important result in mechanics. Through this process a pendulum became useful device for time measurement. But due to oscillation relaxation it is impossible to measure long periods of time. The mechanism has to be wound up all the time. Apart from that, clock pendulum involved iron cores which changed their length with the change of temperature. Say, one-second pendulum needs 0,025 mm increase to its length to lose one second, and this process happens at the 2 degrees centigrade rise in temperature.

Humanity has invented a lot of kinds of clocks and watches: dial, water and fire clock, sand-glass, oscillating and observatory clock, digital clock, atomic clock, etc. The oldest known sundial is from Egypt and dates back to around 1500 BC. Salisbury cathedral clock,  dating from about 1386,is claimed to be the oldest working clock in the world, speaking about mechanical clock. 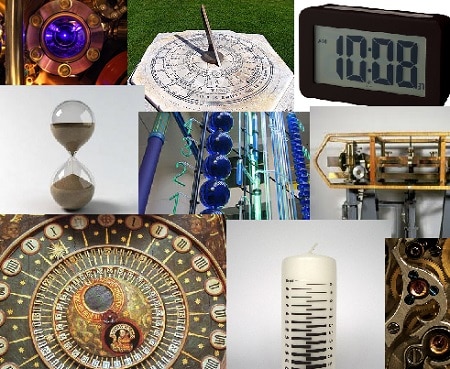 Which is the most precise one? Nowadays the most accurate time is shown by the atomic clock. Its work is based on the transition between electron energy levels and to understand the basics of it we need to engage atomic physics. Oscillation frequency of electromagnetic waves correlates with the period of measured time with the help of electronic microchip. There are several types of atomic clocks nowadays. They use electromagnetic oscillations from the production of atoms of hydrogen, cesium or mercury in quantum generator. Error of measurement can constitute 1 second per 3 million years. Work of mercuric atomic clock stems from energy levels of mercury ion transition, which is captured by electromagnetic trap. Accuracy of such clock is 5 times higher than that of cesium atomic clocks. Let us consider the latter.

The principle of work of caesium clock is defined by the following process. Alkaline metal is to be heated in the smelt-furnace. Electrons start “jumping” from one energy level to another. The obtained frequency resulting from metal emission regulates the work of the clock. The first atomic clock was invented in the USA on the basis of ammoniac quantum generator. Later these clocks appeared in Russia and Japan and by the present day their creation is already developed in China.

It is cesium atomic clock to set the standard to time and frequency measurement. It changed in 1967 when 9 192 631 770 periods of electromagnetic emission, which appears during the cesium-133 atom jump, were fixed per a second. Traditional atomic clock is very huge – of about 2 m. This is how caesium clock looked back in 1955: 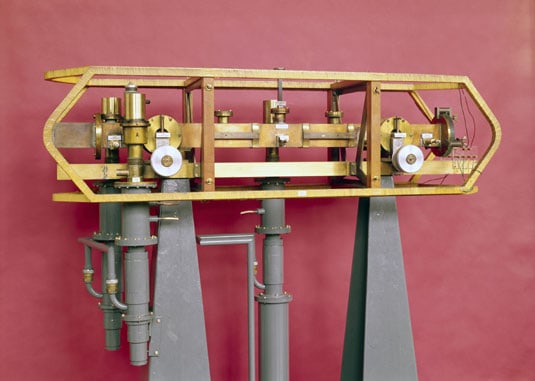 It is used in testing and researching laboratories as well as in navigation systems. However, newspapers have been saying recently that smaller atomic clocks have already appeared. Thus, caesium is literally the chemical element which has redefined time.

Scientists from American National Standards Institute have achieved the impossible: they created clock that is 1 sec slow per 1 bln of years. First time they spoke about the innovation in 2003 showing the example that was far from perfect. Ten years later scientists represented improved atomic clock model of high accuracy. This clock overcomes the most precise devices that were invented earlier. It was developed on ytterbium basis. This grey metal can be easily adapted, but its level of air oxidation is very weak. It refers to rare earth elements under the number of 70. Almost 10,000 ytterbium atoms were used to create this watch. They were cooled to the temperature of about zero and put to the optical lattice with the help of laser ray. They are kept in the lattice due to vacuum. Another laser which makes atoms jump brings the device into action. According to the calculations, this clock can run 1 second behind only in a billion of years. At the moment people cannot use it as hand watch due to its huge size, but it can help with adjustment of satellite connection.

Such high accuracy would help to conduct experiments in sphere of relativity theory, scientists hope. This clock can measure different passages of time in the points of 1 cm distance from each other (as a result of gravitation time in the lower point runs slower than in higher one).

Maybe it’s not that pretty, but here’s one of the most accurate clocks on earth: 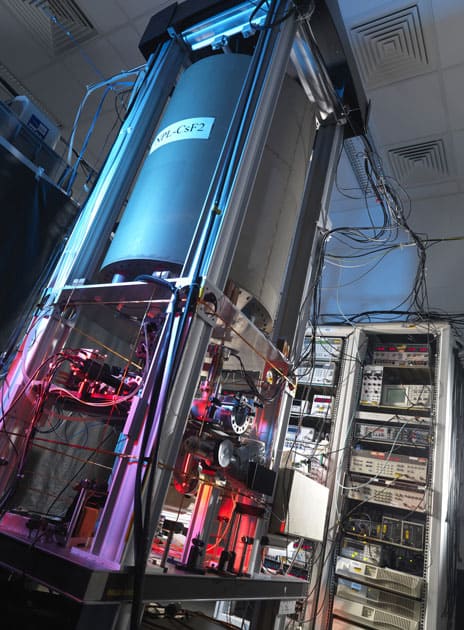 Atomic clock is a useful device not only for scientific research, but also in engineering. Precise time measurement is required in the global positioning system – navigational satellites always involve atomic clock. The navigation satellite system works receiving signals induced from satellites to measure the distance between satellite at the moment of signal emission and the receiver when the signal is received. Having registered the time of radiofrequency signal and the speed of its distribution it is easy to define the distance to the source of emission. On the top of that, timing and synchronization of clocks with satellites and receivers are necessary to calculate coordinates in a correct way. Atomic clock is fixed to the satellite to measure the time within the accuracy of 1 nanosecond. Scientists work decisively to optimize suck clocks in size. Position indication of spaceships, satellites, ballistic rockets, airplanes, submarines, and even of automobiles moving on an automatic basis with the help of satellite connection are impossible without atomic clocks. They are used also in the system of satellite and land telecommunication as well as in the mobile telephony exchange, international and national standards bureaus, and in exact time services which translate time signals over the radio.

Needless to say, that although traditional gear-working clocks are less precise, in daily life the difference is beyond notice and, besides, up to now they are more convenient, so don’t throw away your favorite watch yet!