Have you ever seen a lotus? If yes, you’ve probably noticed that its flowers are not only incredibly beautiful, but somehow stay clean even when the water around is muddy and dirty. Leaves and flowers are not wetted by water, so the droplets roll off them like balls of mercury, washing away all the dirt. Do you know why the leaves of this amazing plant possess self-cleaning property? This is called lotus effect and we’re going to discuss how it works.

It is widely known that a drop of any liquid put on a solid surface (as it is on the picture below) either adopts spherical shape or eventually spreads across the surface. The size and convexity of a wetting angle (or contact angle) $\theta$ is determined by liquid capacity to moisten the area.

The phenomenon of wetting can be described in the following way. If the liquid molecules are attracted towards each other more than towards molecules of the solid surface, the liquid is more likely to form a spherical drop. It happens to mercury on the glass and to water on greasy surface. 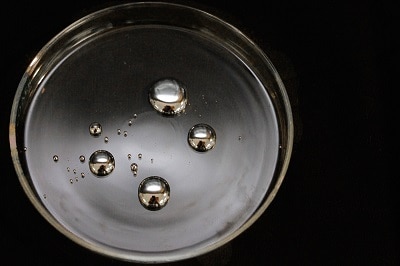 Conversely, if the molecules are less attracted towards each other, the liquid is “pressed” to the surface and spreads over it. It happens to the drop of water on the clean glass. 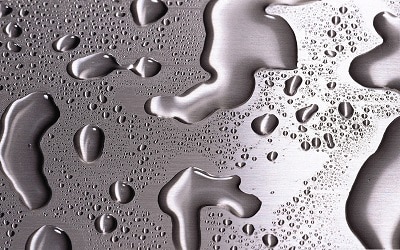 In the first case, the liquid does not moisten the surface (the contact angle is greater than 90°), however, in the second case it does (the contact angle is less than 90°).
Consequently, the process is defined by the force of attraction between the liquid molecules and the solid surface, which in its turn depends on the nature of liquid and properties of the surface. Can these properties be controlled? The answer is – yes! During the process of evolution, plants and animals have created a lot of different ways. The most obvious of them is to lubricate the surface with a thin layer of substance, which attracts or does not attract particular liquid. Speaking about water, we mean hydrophilic or hydrophobic base. It is easy to check that surface covered with oil makes the glass water repellent, unlike, for example, glass smeared with soap that decreases water resistance.

Water repellant coating helps animals to save themselves from soaking. Research of marine birds and animals has showed that their fur and feathers possess hydrophobic properties. As a result, there appears an air layer between their body and water, which plays a key role in temperature regulation and thermal insulation.

However, lubricate is not enough. Structure of surface is also important. Rough, bumpy, and porous relief can boost wetting. Sponges and terry towels absorb water perfectly. Nevertheless, if the surface is originally water-shedding, irregular relief can only worsen the situation: droplets gather on the bumps and flow down.

Lotus is one of the most beautiful aquatic plants on our planet. It has not only gorgeous flowers, but also an ability to keep them clean even in muddy water. Leaves and flowers cannot be wetted with water, this is the reason why water drops slide down cleaning the dirt. Even glue and honey cannot take hold on its leaves. Besides, many plants also have the same quality of self-cleaning, the cabbage, for instance.

It appeared that the surface of each leaf is covered with “micropimples” – papillae of about 10 µm high. These papillae are covered with microvilli, which are even smaller.

Investigations have showed that these papillae and microvilli of lotus leaves and other plants are made of wax. It is peculiar of wax to have high level of water resistance. However, the wax on lotus leaves itself cannot explain the reason why the contact angle makes more than 160°, while the contact angle on magnolia leaves, also covered with wax, constitute only 54°. It means that it is pimple-bearing structure of the surface that substantially reduces the wetting, what makes contact angle three times larger. 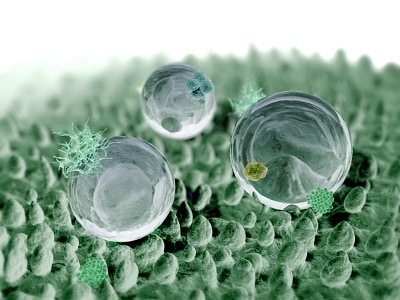 The drop of water put to the surface of lotus leaf, which is similar to massage brush, does not penetrate between papillae. The tension of liquid does not let it through. 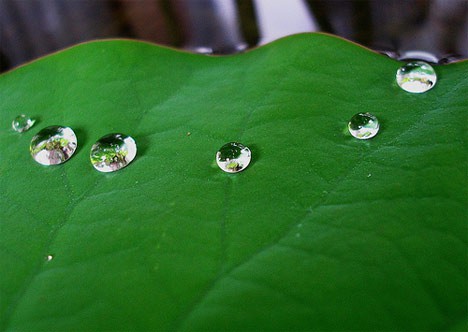 To get through the papillae the drop surface area has to be increased, which is energy consuming. That is why the droplet “dances on pointe” between the bubbles of air. It significantly decreases the adhesive force between the droplet and leaf surface. Hence, it is not advantageous for the droplet to spread over the “prickly” surface and it turns into a sphere (the body of minimal surface area for given volume), demonstrating very high contact angle (in simple words, the drop’s being nearly spherical).

The surface similar to massage brush reduces not only water adhesion (clinging), but works the same way for other particles of a size greater than 10 µm, since they touch the surface only in several spots. Hence, particles of dirt either fall off the leaf, or are taken away by the flowing water droplets, to which it is more likely to cling to. This is what we call “lotus effect”. German botanist Wilhelm Barthlott discovered it in 1990-s, despite the effect had been already noticed before.

Many insects, such as butterflies, need to secure themselves from overabundance of water as they can lose the ability to fly, so their wings have the same coating. Below you can see a butterfly wing under microscope. Macro pictures of butterflies with water droplets on their wings demonstrate the same effect of water repelling. 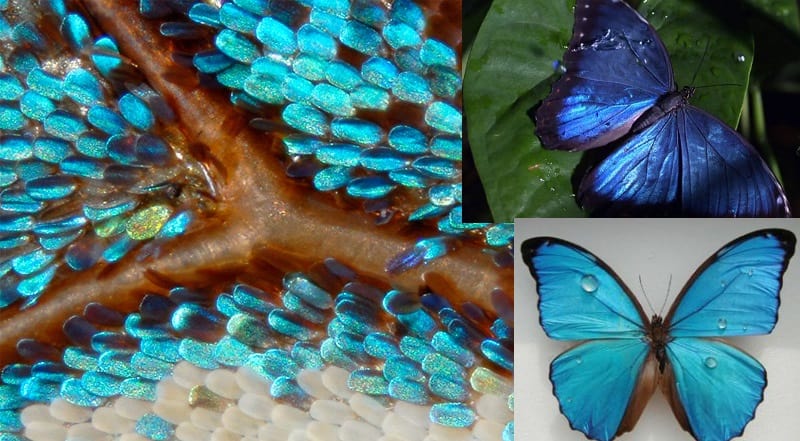 This secret of nature helps scientists to create different types of self-cleaning surfaces. Lotus effect is used to produce water-repellant coating and paint. 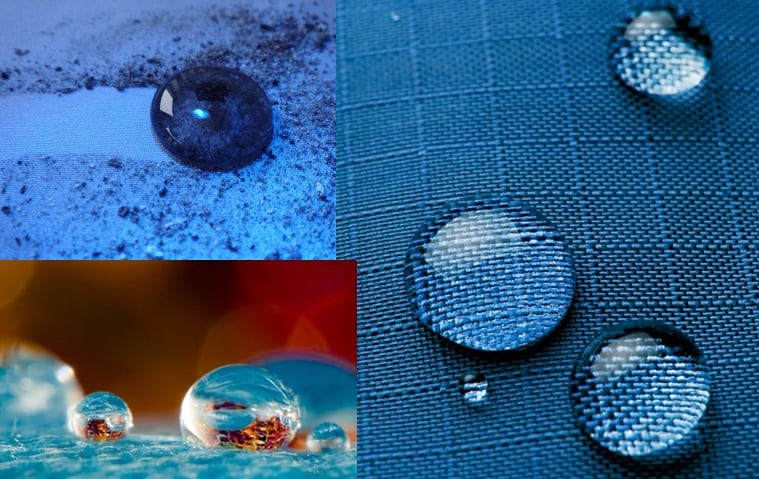 The self-cleaning windshield with microvilli surface is being elaborated now. Such windscreen does not require wipers. Not only can we cover the house with paint that repels dirt nowadays, but also it will soon be possible to observe constantly clean wheel discs. These technologies have a great future.

so that’s how self-cleaning coatings work. wonder if they could make such clothing.. i’d save some money on laundry, haha