Nearly two-thirds of all people experience deja vu at least once in a lifetime. Déjà vu is an apparent similarity of the current situation to something in the indefinite past. But despite its prevalence, surprisingly little data is gathered about the physiological nature of the déjà vu phenomenon. It’s complicated to gather information on deja vu because it’s hard to recall the details of a short experience that took place perhaps months and years ago. In addition, often a sense of deja vu dominates the other senses, reality seemingly doubles.

Déjà vu comes from French and literally means “already seen”. Earlier psychologists interpreted the phenomenon of deja vu as a disease, an illusion or hallucination of memory.

Healthy people often have deja vu experience in the evening in the company of others, while listening to someone, being tired after uneasy non-pleasant mental activity, physical stress or excessive alcohol consumption.

Frequency of deja vu decreases with age. The exception is rather low incidence of déjà vu in teenagers.

Strong correlation is stated between the ability to remember dreams and experiencing deja vu. Often people say their deja vu repeats their dreams. If we are faced with similar situations as seen in our dreams the feeling of déjà vu may appear. 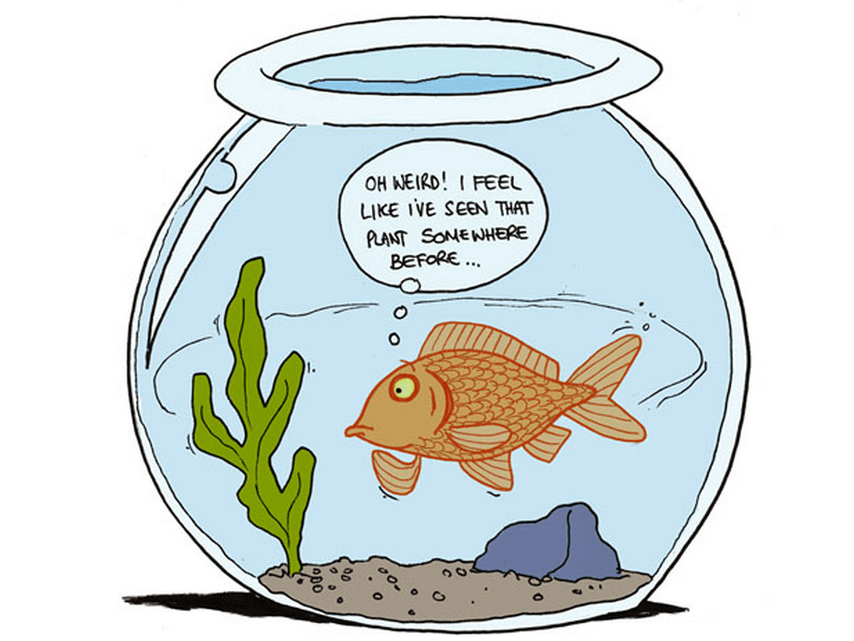 Dual processing hypothesis is based on the idea that the two mnemonics (storing) processes which typically operate in concert, suddenly begin to work asynchronously, or one of the processes is activated in the absence of the other. For example, Gloor (1990) proposed the idea that the recollection of something and feeling familiarity of this something is two independent cognitive functions that normally operate in concert. Then memories are accompanied by a sense of familiarity. But if these two processes suddenly occur independently – a person feels something familiar in unfamiliar situation – there comes a sense of deja vu. 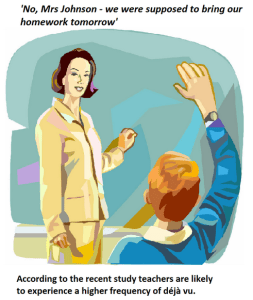 Hologram theory and other memory hypotheses

Memory hypotheses suggest that some aspects of the current situation are really familiar, but the source of this similarity is forgotten.

One hypothesis in this category claims that deja vu may be caused by some familiar object, which in this case we did not know or recognize, because it is in a completely different context. Then the feeling of familiarity is transferred to the situation in general.

Sno and Linszen (1990) proposed a holographic explanation of deja vu. Memories, under this hypothesis, represent a unique pattern of neuronal activity. If any element of the current situation coincides with the element previously experienced, memory is activated. If this component activates only subconscious memories we experience a feeling of deja vu. If “all” memory is activated one merely recalls the previous situation.

Hypothesis of emotional connection also belongs to this category. Thus, some factor (a person seen, name heard, or even the smell of perfume) can cause an emotional reaction. If the subconscious emotion is not properly connected with the source of memories, one can perceive the emergence of emotions as feeling familiarity with unfamiliar situations.

Double perception and other attention hypotheses

Also, there’s the hypothesis of Inattentional blindness, also known as perceptual blindness. Recent studies indicate that people often don’t pay attention to the object that is in the visible region, provided they’re focused on some other object within visible region.

Or, for example, imagine a person coming into the room, talking on a cell phone and looking straight ahead at some object. After that, looking at the subject consciously may result in a feeling of deja vu.

Perhaps the effect of inattentional blindness is caused by inhibitory mechanism – perception of the visual scene can suppress the perception of the other part. When a person looks again immediately after at the same visual scene, originally “depressed” areas are deblocked and when matchedwith their current perception create a sense of deja vu.

Some scientists are quite pessimistic about the possibility to explain the nature of deja vu, because of its brevity and lack of mechanisms to initiate it. Single proven and accepted by all the explanation has not been found yet.  The hypothesis of attention and memory acquires the greatest support among scientists. Hopefully, application of modern advanced research methods will allow to explore all the features of our memory and explain this mysterious feeling of “deja vu”.

The other day I was philosophizing about this, and came up with an other than the above couple of theories.
There might be some linguistic mistakes I’ve made, Dutch is my first language, English close second. Apologies in advance.
I have no science to back this up or whatsoever, but hey, here it goes:

Everyone has a favorite eye/ear, just like a favorite had which we call being left or right handed. Like that, everybody is left or right eyed/eared. For instance, pay attention to with which eye you look someone in the eyes, and which eye you’ll look at; or if you can’t hear someone (in front of you), which ear you’ll turn to them to understand it better.

Our brains try to merge things when something’s not right, or to make up for something missing, so you’ll still be able to follow (like the longer first second when you start looking at the seconds hand of an analog clock, called chronostasis (https://en.wikipedia.org/wiki/Chronostasis)).

If what you see with your left and right eye are not processed simultaneously, but just right after each other, which doesn’t look like the double vision when you squint, but your brains try to make it one image. Because you just processed half of what you see, you’ll think “Wait, what? I’ve seen this.”

Likewise with the ears, it doesn’t become an echo (because there is no actual echo present), but you think you know what will be said next, although you can’t predict it or sync your speech with theirs; you’re just hearing it a split second earlier (so to speak, the sound waves are hitting your eardrums at the same moment).

Or we’re just going mad. Wait, didn’t someone told me that already?

I have another hypothesis. deja va may come through the dream state. ie: waking life experience involves a past ‘dream’ component rising almost to the surface of consciousness. It is often quite difficult to even remember the dream sequence. Just the deja vu feeling. On the other hand, remembering the actual dream brings another perspective into play. Similar to holographic memory. Having a detailed dream ‘come true’ – in detail, perhaps gives whole new meaning to the idea of holographic genetic memory or something else.