Chocolate  is the most tasty and popular dessert in the world. The history of its use as food product harks back to the times of Maya and Aztec ancient cultures. Unlike us, they used cocoa drinks for treatment and prevention of diseases. Today, scientist have discovered a lot of interesting compounds in chocolate that really have benefits for health. Several pieces of research have proved that cocoa has a positive effect on cardiovascular and nervous systems. A lot of other influences of chocolate have been studied by scholars all over the world in recent years. What are the most probable benefits of chocolate? Is it really the tastiest medical drug with great nutritional value or one more controversial issue? Lets see.

As everybody knows, chocolate is a product made of cacao tree (cocoa tree, Theobroma cacao) seeds. Originally this plant was spread in Central and Southern America but since 16th century it has been cultivating also in Western Africa and South-Eastern Asia. Pure cocoa production is a long process. After fermentation with bacteria and yeasts, cocoa beans are dried and roasted. Later the extracted nib is liquefied with the production of cocoa liquor separated for cocoa powder and cocoa butter. Cocoa beans contain great amount of different substances with specific biological properties (i.e. antioxidants) with names hard to say and remember:

From childhood, we hear that eating a lot of chocolate and other sweets has negative effects: caries, excessive weight, problems with stomach, etc. True, but… Moderate amounts of chocolate are not dangerous, but even beneficial. Cocoa drink was used with the therapeutic purpose by Maya and Aztec. Scientists have been conducting a lot of researches and analyses proving that dark chocolate (Yes, exactly dark but not milk or white that can be hardly called a chocolate itself) has a lot of benefits. One of them is positive effect on cardiovascular system: chocolate lowers blood pressure, decrease concentration of cholesterol in blood and lowers heart disease and stroke risk. One of the newest observations (EPIC-Norfolk study), having analyzed 20.000 people, confirms that regular chocolate intake is associated with lower risk of heart diseases. Scientists have shown that 100g of chocolate per day is not dangerous but helpful for your heart.

Moderate amount of sugar (glucose and fructose) stimulates brain to work while another components of cocoa increase brain blood flow, facilitate attention and brain endurance. Hey, next time you’ll be doing your homework or preparing for exams, don’t forget to charge your brain with a bar of chocolate.

Popular and well-known influence of chocolate on the nervous system is a general calming effect due to the stimulation of serotonin and endorphins production. These endogenous neuronal mediators act as antidepressants. Furthermore, experiment with snails made by Hotchkiss Brain Institute in Canada showed that flavonoids from cocoa improved the snails’ long-term memories and made them … smarter! Basing on several other studies, the list of dark chocolate positive influence can be extended: 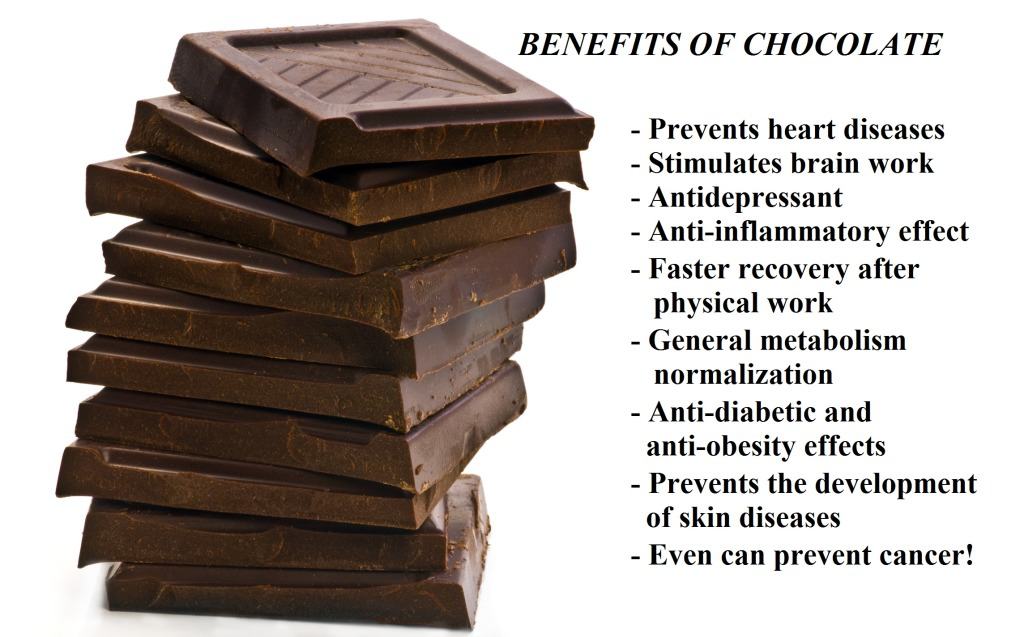 All effects of chocolate or cocoa are connected with the compounds (yes, those that are difficult to remember). But to prevent some diseases you don’t even need to remember those heard names. You can easily use dark chocolate to cook different tasty dishes and enjoy yourself. Besides, scientist doesn’t recommend to eat chocolate with milk cause it can decrease the activity of nutrients in chocolate, which is not that good.

Now you see that cocoa and chocolate contain a lot of different compounds with great nutritional value. Containing a lot of antioxidants, they have a lot of benefits for your heart, brain and metabolism. Of course, eating too much of it may have a negative effect on your health in some cases, so treat yourself, but don’t overestimate!