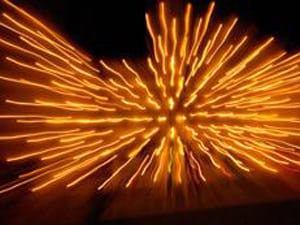 One of the most incredible predictions of quantum theory is the fact that the vacuum is not an absolute void. In fact, it is swarming with virtual particles, which under certain conditions, appear and disappear again and again, as rabbits in a hat of a magician. For a long time, it has been impossible to “feel” these “little animals”. But in May 2011, scientists from Chalmers University of Technology in Gothenburg (Sweden) conducted an experiment and extracted of the photon fluxes from the vacuum that means some “development” of hidden in its virtual particles. Thus, they confirmed the critical situation of the quantum theory.

The particles, generated by the vacuum, are called virtual, because their existence is extremely fleeting. In accordance with modern ideas, they are born in pairs “particle – antiparticle” and disappear as a result of annihilation. Thus, the virtual pair “electron – positron” annihilates when a virtual photon is formed, which is again converted into electron-positron pair, and so on. The birth and annihilation of virtual particles are quantum fluctuations. For elementary particle the vacuum is just the lowest energy state of fields that correspond to the particles. And if a field located in the vacuum state, will be provided with sufficient energy, then its excitement appears, that is, the creation of particles, quants of the field.

How can we “knock out” the virtual particles from the vacuum? The Dutch physicist Hendrik Casimir and his colleague Dirk Polder were the first who proposed such theoretical method in 1948. They concluded that between the two parallel planes, which are very closely located, the attractive force should appear due to only quantum effects in a vacuum. A similar effect can be compared with known cases of sudden attraction and collisions of ships at sea. When two liners, swaying from side to side in a heavy sea, are at a distance of less than 40 m from each other the excitement in the space between them stops. The calm sea creates a lower pressure between the frames and as a result a force, which is tending to pull them, appears.

The Casimir effect: between two conducting plates, placed at a distance of several tens or hundreds of nanometers, only virtual photons are born with wavelengths that are multiple to the distance. Outside the plates there are any virtual photons. Since vacuum fluctuations are pushing the plates towards each other. 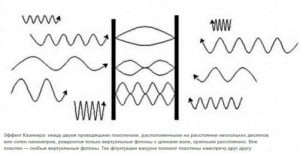 The same effect, as Casimir suggested, should be observed between the two mirrors in a vacuum. It can be metaphorically described as “negative pressure” when the vacuum is devoid not only of ordinary particles, but also part of the virtual, that is it was pumped out of all and even a little bit. This hypothetical phenomenon has been called the “Casimir effect”. The attractive force is inversely proportional to the fourth degree of the distance between the plates, i.e., with decreasing of distance it increases dramatically. But even at submicron distances, it is so small that to detect the Casimir effect experimentally became possible only ten years after his prediction, and to conduct direct measurements – in 1996.

Later the other possible experiment was developed. According to theoretical calculations, a similar phenomenon can be observed, if to disperse the mirror in a vacuum to the speed close to the speed of light. During the movement its surface would absorb the energy of virtual particles, and then emit it in the form of real photons. But how such an experiment technically could be performed?

Christopher Wilson and his colleagues at Chalmers University of Technology in Gothenburg solved this tricky task: it is enough to make the mirror vibrate with a great frequency. Then it also must “sparkle” with photons. For the experiment, they used a superconducting quantum interference device (SQUID), which is extremely sensitive to magnetic fields.

In this device there is a miniature metal loop with two special contacts – superconductors, separated from each other by a thin dielectric layer, was exposed to an alternating magnetic field impact, fluctuating at a frequency 11 billion times per second. By impact of the field the loop fluctuated with small amplitude, but developed the speed of 5% of the speed of light. This, according to calculations, was enough to “push” virtual particles to the exit of the vacuum and demonstrate the dynamic Casimir effect. After cooling a device to a sufficiently low temperature, physicists have tried to register the produced quants of electromagnetic radiation – and found the desired microwave photons, “jumped out” from the vacuum, and their frequency was equal to half of the frequency of the mirror fluctuation. Such data were predicted by quantum theory.

The findings of these researches can be invaluable help for scientists who study the so-called Hawking radiation – the energy emitted by black holes. The same principles of quantum mechanics, which forced to “sparkle” a moving mirror, make black holes to “glow” with different kinds of radiation.

Certainly, the invention of the Swedish physicists needs an attention. If you improve the performance of the experiment, we can construct the generator of virtual particles and removed from the empty space unlimited energy. Or, maybe we will be able to construct an engine of the entirely new type for spaceship.