The current French system of secondary education, like most European systems, consists of three stages – primary (ecole primaire, from 6 to 11 years) and secondary (college – from 11 to 15 years), and then lyceum (lycee – from 16 to 18). The education of state standard is compulsory for children from 6 to 16 years. In the public school education is free, but there are private alternatives.

Private schools mostly are paid for the students, but less constrained by government frameworks – also provide its graduates with diplomas of state standard. Figure 1 shows two types of schools based on their relationship with the state: subsidized (sous contrat) and unsubsidized (hors contrat). 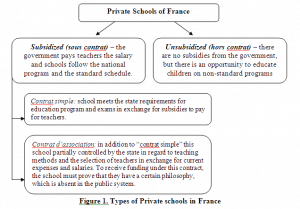 Tuition at private schools is dependent on many factors, but, in general, is not particularly prohibitive within European frameworks. Thus, education in one of the oldest and most elite schools – Ecole de Roches – in 2011 was worth 30,000 euros per academic year. 80% of schools in France are public.

At age of 11, having completed primary school, the young Frenchmen enter the college, which is considered the first stage of secondary education. In college, classes are in reverse order: the student enters the sixth grade; four years later finished the third one. Then the final and binding for all grade comes – the stage of the lyceum, which takes two years. There are two main types of lyceums – general and technological, but inside each category, there are many profiles and specializations. In some lyceums such programs as aeronautics or astronautics are suggested as specialized subjects.

Test of the state (French) language takes place after the first class without any exception. The grade for this test is taken into account when passing the exam at the bachelor’s degree. The latter “graduation” class (“terminal”) is finished with the Bachelor’s exam. Preparation for the final exam is extremely serious because its results are taken into account for entering universities. In general, during three years of lycée, the French both decide to choose their future profession and demonstrate their level to others, submit some kind of request for the future career. 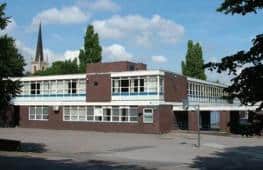 Today the education system in Germany is much more diversified and in the opinion of some analysts less democratic. Critics of the German school system generally point to the fact that the main choice of the child’s future is made in elementary school because later, if the family resources at first didn’t allow to choose a good school, then to become the elite is extremely difficult, almost impossible.

Thus, an elementary school in Germany educates children from 6 to 10 years (or up to 12 years in Berlin and Brandenburg). Children learn to read, count, write, study the natural history there. Differences between primary schools are mainly in the availability and quality of extra-curricular activities. Then the turn of high school comes – from 10 to 19 years. Here, the choice of the type of school is individual for each pupil in accordance with the recommendation of the school, the desire of parents, school level marks as well as the result of entrance examinations.

Types of secondary schools in Germany are as follows:

In addition to these three types, there are also common schools (Gesamtschule) – they combine various features of the gymnasium and real schools, allowing you to receive both human and technical education. Besides public schools, certificates of state standard are also issued by private schools that are generally religious or elite. Private schools in Germany (in public ones the education is expected free of charge) are more expensive then French ones – so, in the prestigious German schools, the total price of the school year is about 40,000 euros.

British secondary school perhaps is the most distinctive system of education in Western Europe. And yet, perhaps the most prestigious – regardless of the type of PISA test, British schools magnetically attracts students from around the world.

Education in the UK is compulsory for all citizens between the ages of 5 to 16 years. There are two sectors of education: the public (free education) and private (fee-paying schools, the year in which costs 40 – 50 thousand U.S. dollars). In addition, there is a large difference between the education systems of different parts of Britain: England, Wales and Northern Ireland have one type of education, Scotland – another one.

One of the most characteristic types of the United Kingdom High School is a Boarding School, a tradition which goes back to the early Middle Ages. Now boarding schools have a reputation of “aristocratic”. In addition to these schools, there are many other types of educational institutions. By the age of students they are divided into:

b)       School for every age: preparatory schools – nursery-gardens, from 2 to 7 years, where in spite of regular kindergarten classes, to read and write are taught, junior schools – elementary schools, from 7 to 13 years, ending with a special test Common Entrance Examination, without which the way to other institutions is closed.

Also there is an alternative system – Primary School from 4 to 11 years, with a further transition to the stage of Secondary School. Then after Junior the Senior High School comes – teens of 13 to 18 years study there. Here, children have two-year study for passing the GCSE exams, which is followed by another two-year program: A-Level or International Baccalaureate. In a parallel system this age is “covered” by Secondary school, which teaches children under the age of 11 years. Final grades for entering further into the universities in Britain are called the Sixth Form, two years of senior training (16 – 18 years).

In Britain, a tradition of separate education for boys and girls is still strong. This is particularly evident in the world of traditional boarding schools, most of which are “separate”. However, the school of “new generation” is often mixed. Free secondary education, of course, is guaranteed by the state, but (like Germany) for a successful career you need to finish the “right” school. But such schools are traditionally private, which cost parents quite expensive.

Compulsory education in the UK applies to children under 16 years of age. Then (after A-Levels) a system of educational credits starts to operate. And the graduate of high school begins to give them only when he/she has a job with salary of at least 21,000 pounds a year. If there is no such job, the duty is not necessary to be returned. 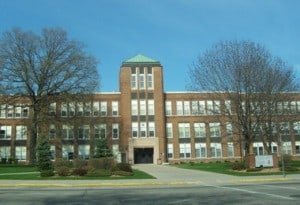 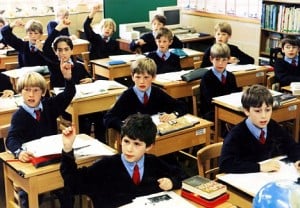 Elementary schools (grade schools or grammar schools) usually teach children at the age from 5 to 11 or 12. One teacher teaches all subjects (math, reading and writing, with an emphasis on improving spelling and vocabulary), except for fine arts, music and physical training, which classes are held once or twice a week.

Secondary schools (middle schools, junior high schools, or intermediate schools), as a rule, teach children between the ages of 11 and 12 to 14 years – from the 6th or 7th to the 8th grade. Here one teacher teaches one subject. Students are required to take classes in math, English, natural sciences, social sciences (often including a world history), and physical training. One or two classes students choose for their own, usually in foreign languages, arts and technology.

High school is the last stage of secondary education in the United States, lasting from the 9th till the 12th grade. In high school, students can choose their classes more freely than before, and just must meet the minimum criteria for certification, which are set by the school board. Typical minimum requirements are:

The entering campaign of many other institutions requires a more complete program, including 2-4 years of a foreign language. Students must choose by themselves other classes. A typical set of optional classes is as follows:

In high school, especially in the last two years, students can take classes to prepare for Advanced Placement exams or International Baccalaureate. Free public schools are controlled mainly by democratically elected school boards, each of which has jurisdiction over the school district, which boundaries often coincide with the boundaries of the county or city, and which finance one or more schools of each level. School boards set the school curriculum, hire teachers and determine the funding of programs. The money for schools are taken mainly from the local (municipal) property taxes, so that the quality of schools heavily depends on house prices and how much parents are willing to pay taxes for good schools.

Approximately 85% of children study in public schools. Most of the rest goes to private schools, many of which are religious. There are even boarding schools that gather pupils from across the country, such as Phillips Academy in Exeter, New Hampshire. Tuition in these schools is 50 000 U.S. dollars per year.

A child starts a compulsory education at age of 7 and ends up to 16-17. The state guarantees free primary education. This includes training, textbooks, notebooks, basic office supplies, meals at school is also free. Learning English begins in the 3d class; in 4th a child chooses an optional foreign language (French, German or Russian). In 7th grade the study of the compulsory Swedish language begins.

After receiving basic education students need to make a choice:

In Finland, there is a practice of “concealed payment” of certain types of secondary education: in public school textbooks are provided free of charge, at high school they need to be bought – it’s about 500 euros per year, and the entire amount must be paid at once. As for private schools, the education requires to spend 30 – 40,000 euro per year.