Higgs boson is the elusive elementary particle, in which search a lot of physicist are engaged for several decades. 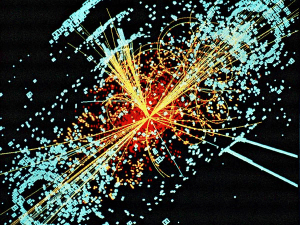 Bosons are elementary particles, which according to the atomic system of units, have integer spin, i.e., the angular impulse of elementary particles. The particles are called bosons to honor Indian physicist Bose, who owns the statistics for such particles, called the Bose-Einstein statistics. According to these statistics, one quantum state can contain an unlimited number of identical particles. Since the bosons have the ability to transfer interaction, they are sometimes in English literature termed as the field.

The examples of bosons are such particles as photons, gravitons, mesons, and, respectively, the antiparticles of all these particles. Unlike other virtual particles – fermions, which include, for example, the electrons that make a negative contribution to the vacuum energy, bosons give a positive contribution.

Higgs boson, predicted by Dutchman Peter Higgs, is a “cornerstone” of the standard model, because this particle is the missing link in explaining the nature of one of the most important physical quantities – the mass. The standard model does not show anything on boson’s own weight in addition, it rarely shows itself in the decays observed at existing accelerators, so its search dragged on.

Boson explains why the other elementary particles have mass. When the universe began to cool after the Big Bang the hypothetical force, known as the Higgs field, together with its quanta, a particle called the Higgs boson was formed. It is this field (and not a boson) explains the appearance of the mass of the particles that formed atoms. Without its existence the particles merely pierced the cosmos with light speed. It is known that particles with mass can not accelerate to the light speed. The Higgs field principle of operation can be compared with the behavior of the paparazzi and journalists, who surrounded the movie star, complicate its movement around the room or outdoors. In other words, they “lay a mass” to the movie star.

Physicists working at the Large Hadron Collider, announced that in two experiments conducted at supercollider by two different detectors (Atlas and CMS), clear signs of this elusive particle are revealed. However, they are not enough to formally declare the scientific discovery, but scientists have little doubt that the “God particle” finally is “in their pocket”. They should only to collect statistics. 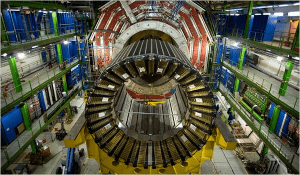 Discovery of the Higgs boson has been the main purpose of the giant collider construction. Using this device the scientists disperse beams of protons to relativistic velocities and collide them with each other, hoping to find the elusive boson in even smaller fundamental particles – “fragments” that formed as a result of the collision. I.e. Higgs boson was being looked for win-win method of “lying, do not go away”, gradually narrowing the range of masses, which it could have.

Experiments conducted at the LHC and closed now “Tevatron” (USA), clearly cut off a large range of possible masses of this particle – from 476 to 141 gigaeletkronvolt. Thus, the method of discovery the Higgs boson, used at the Tevatron, differed from the methods used at the LHC. At the Tevatron the Higgs boson was looked for in the particles decay into the b-quark and b-antiquark and at the LHC – the decay into two photons. Therefore, these two accelerators are complementary. Thus, in the range 114-141 GeV only a small “gap” remained and the last few months of experiments conducted at CERN these masses were testing. The trap shut – the Higgs boson, if it exists, is simply nowhere to be hiding.

Analysis results of these experiments, including 500 trillion proton-proton collisions, show that the tracks produced on the detector Atlas, “necessary” fluctuations of the particle with mass of 116-130 GeV are found. Those fluctuations were found at the detector CMS – they can be generated by a particle with a mass of 115-127 GeV. Unfortunately, the statistical significance in both cases is small and does not exceed two sigma (in other words, these fluctuations could arise by chance in one out of 35). However, the coincidence of the mass in two different experiments clearly speaks in favor of the existence of a particle, and not of chance.

A few decades ago, scientists developed the so-called theory of boson stars, i.e. stars that consist of scalar particles, hitherto are not yet discovered. But while such a model is just a mind game, which, however, can be confirmed at any time. So in 2012, the physicists of the two collaborations intend to collect a sufficient statistic, and finally put an end to this protracted search.