Imagine you walk down the street without an umbrella and suddenly the rain starts. You are empty-handed and don’t have a raincoat while the rain intensifies. What are you supposed to do? What’s the best strategy – to run, to walk, or standing in the rain gives the same result and there’s no need to hurry?

Majority of people immediately answer: RUN! Find the closest shed as quick as possible. The simple truth it seems to be. However, some will venture to disagree saying that there’s no need to run as they would catch more raindrops than during a simple walk. 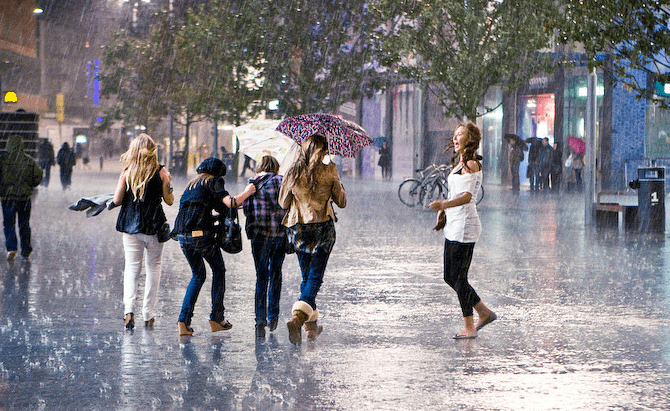 Franco Bocci, an Italian physician, stated that one has to run with all might to eschew soaking. Nevertheless, his work published in European Journal of Physics did not put the end to the quarrel between physicians which started in 1970’s.

Argument between two opposed parties hasn’t ceased as there appeared series of articles to disprove each other. The last publication was brought out a year ago persuading that it is necessary to run but with an optimum speed. To answer the rain question some science-lovers even conducted the rain experiment using sheets of paper and comparing wetted area.

Professor Bocci approached the question with mathematical accuracy. He suggested that the running person’s fit, speed of wind and its direction should be taken into account. Thus, he described it with the help of easy formulas and came to the conclusion that it resembled those describing electromagnetism. After all, professor recalled his lecturing to the first year students and spread electromagnetic approach to moving bodies of different shape. He applied his theory for parallelepiped and cylindrical bodies.

Consequently, the following conclusions were made. If it rains vertically, one has no better option as to run hotfoot. If the wind blows from behind, the possible strategy is to run receding with a speed of wind. If the wind is dead against you, it is impossible to get soaked less, so simply find the closest shelter. Unfortunately, this plan of actions is relevant only for those who are thin and tall, or, academically speaking, when area ratio of the body’s vertical plane to horizontal plane is pretty big. 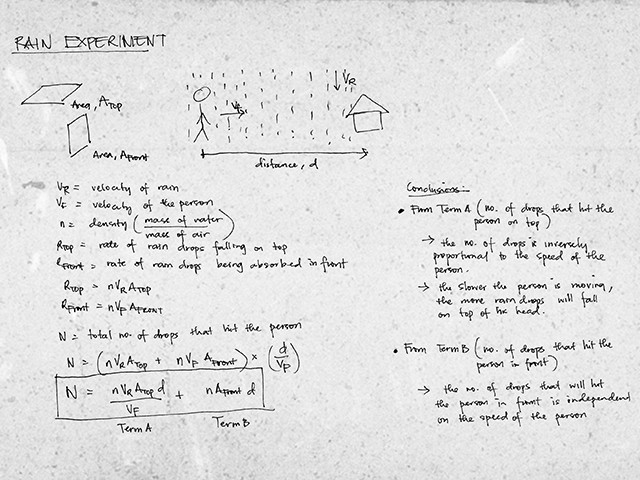 Hence, if it rains and the shelter is near, it is strongly advised to run so that you could spend less time wetting. This statement is in agreement with aforementioned rain experiment, which showed that “when it starts to rain, do walk as fast as possible. But nothing beats awareness of the forecast that gives you a chance to take an umbrella”. On the contrary, when it’s going to rain long hours, no matter whether you move slowly or quickly, you’ll be equally sodden. Finally, when it mists it is recommended to walk slowly or even to stand still for while running the wetting area can only increase. Also, if you’re somewhere in the countryside, beware, that if you choose running you can accidentally fall into the puddle in your way which is clearly the worst situation concerning soaking process. You’ll be sopping wet at once!

Moreover, take into account that rain reduces visibility of the road not only for you, but also for drivers. And, thus, running across the street is not the best variant, especially when it rains. And it’s one more drawback of running in the rain. Remember that getting wet is not the worst option in this world.

Anyway, next time simply don’t forget to pick an umbrella with you.