What is “cloud computing”?

It is the concept, according to which the programs run and produce results of operation to the window of a standard web browser on your PC, with all applications and data needed for operation are on a remote server on the Internet. In other words, cloud computing is a software and hardware available to the user via the Internet (or LAN) as a service, allowing the use of convenient web-based interface for remote access to selected resources (computational resources, programs and data).

Advantages of moving into the cloud

Saving disk space (both data and programs stored on the Internet). 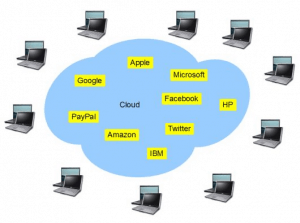 Estimating the effect for the EU economies

As published in the report “Cloud dividends – 2011” in December 2010, Centre for Economic and Business Research (CEBR) examines that by 2015, thanks to cloud computing economics of developed European countries will receive an additional €177.3 billion per year. The report, commissioned by EMC, is the first of its kind assessment of the development of cloud computing value at the macroeconomic level for the five largest economies in Europe (Germany, France, Italy, United Kingdom and Spain).

CEBR estimates that the annual economic impact of cloud computing for each country by 2015 will be: The effect billion Euros:

€177.3 billion may cover loans to some debtor countries of the region, such as Ireland (€85 billion) and Greece (€110 billion), and will help meet the UK government plan on reduction of government expenditures by €95.7 billion over four years about which it recently announced.

Cloud computing is a new approach to IT, where technology is becoming available to enterprises in the necessary amount and when they need them. This accelerates time of products launch into the market, removes traditional barriers to entry and allows companies to exploit new business opportunities. Increasing competition, this direct effect of cloud computing will have a huge impact on the structure of the market in many economic sectors, and hence, on the world macro-economic indicators, according to CEBR.

CEBR considers that cloud computing will be a vital factor in economic growth, competitiveness and creation of new businesses across the euro area. This emphasizes the importance of this technology for the economic recovery in the region, particularly in the face of growing threats from countries with developing economies, which have traditionally benefited from more intense competition.

The second report, which was published in February 2011, the economic effect and impact of cloud computing on specific sectors of the economy of France, Germany, Italy, Spain and the UK were considered. So the largest share of the benefits of cloud computing will have on the sector of distribution, retail and hotel business – the only exception is Germany, where the leading position will belong to the banking sector.

The estimation of the economic benefits based on the calculation of savings in capital and operating costs achieved through the use of cloud computing, as well as on the assess of the impact of cloud computing at the macro-economic and business indicators, including development opportunities for business, opportunities for business creation, the total indirect value-added cost, tax revenues and the costs of cloud services.
So let’s go with the new trend without any worries, learn more and rapidly develop own careers!