If walking down the street you come across a cat with black and red patches – be sure it is she. Nearly one hundred percent of calico cats is female. But why it’s so? To answer this question we need to involve a bit of genetics into consideration. Let’s see why male cats almost never happen to be triple colored.

Male and female cats’ coat color differs in case when genes that define coloring are located in sex chromosomes. The latter which were indicated as X and Y, define the forming of gender itself. Female cats, like all the other mammals, have 2 X-chromosomes (XX) whereas males have one X and one Y (XY). 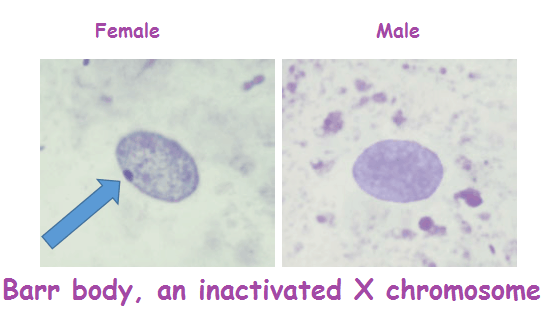 In 1949 Murray L. Barr and Ewart G. Bertram showed the compensating mechanism of the dose of X-connected chromosomes. They found dark bodies in the nuclei of female cats’ nerve cells, which were absent in those of male cats. These structures represent the inactive X-chromosome and are called sex chromatin or Bar chromatin bodies. 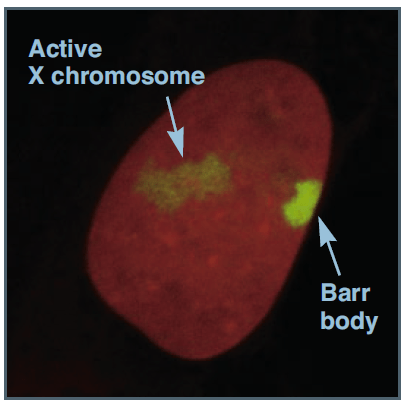 Hence there is a question, which of two chromosomes is inactive? Is this choice random? Or is inactivated chromosome always the same? Biology can provide us with an answer. Let’s see.

In 1961 Mary Lyon presented a hypothesis which answers these questions. It was stated that choice of inactive X-chromosome in somatic cell is arbitrary each time on an early stage of embryonic development. After inactivation all descendants of “mother-cell” have the same inactive cell. This explanation became Lyon hypothesis. It appeared after watching spotted female mice. They possessed spots of two colors – white and black. Two variants of genes (allelic genes), which defined the fur color, were located on X-chromosomes. Spotting appeared on hair as a result of random inactivation either white, or black X-chromosome and depended on gene which left active.

Similar mosaic pattern is a typical feature for female cats whose fur tend to have red and black patches. White hair is preconditioned by another gene out of X-chromosome. While activation of this gene, X-connected genes, defining red and black color, tone down, consequently fur stays white. Those cats are triple colored and called calico cats. Female cats with inactive white gene have only red and black spots. This breed is called tortoiseshell.

Such maculation is uncharacteristic for male cats since they have only one X-chromosome, and consequently, only one variant of fur color – red or black. The following picture illustrates the Lyon hypothesis. As it is shown, female cat inherits one X-chromosome that contains allele presupposing red color of hair (Xb). The second X-chromosome has an allele that provides black color forming. In what way can maculation be explained? From the very beginning both embryonic chromosomes are active. However, a bit later one of them becomes inactive in each somatic cell and forms the Bar chromatin body. For example, embryo cell has inactive XB chromosome (chromosome with red allele stays active). Step by step this cell becomes divided creating lots of cells of grown-up organism. Skin cells derived from this embryo cell make up a red spot of fur. Other embryo cell, for instance, has inactive X chromosome with red allele. Cells of skin generated by this embryo cell produce black spot. Since the choice of X chromosome is random, cat has red and black patches of fur. 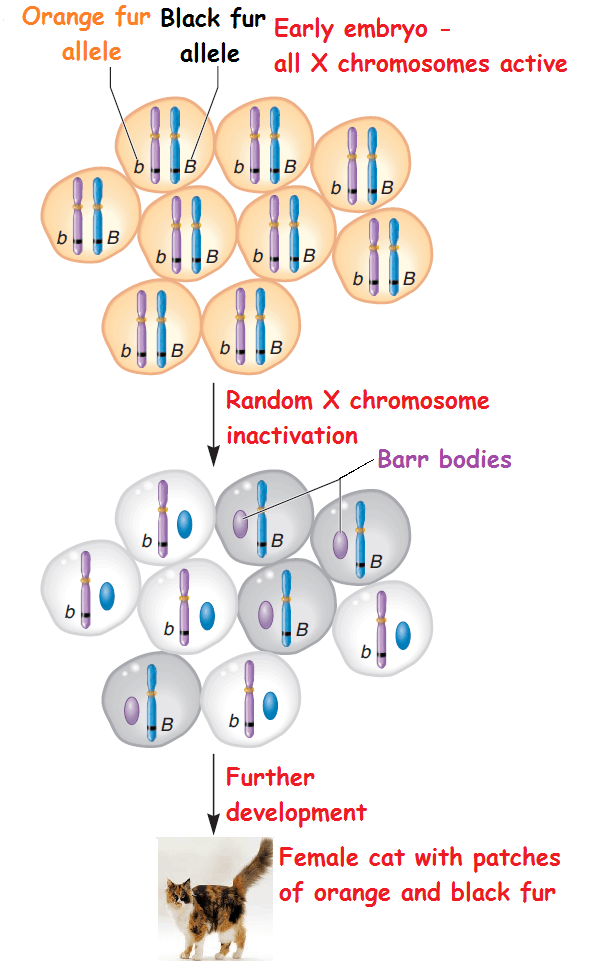 Despite all aforementioned triple color male cat can sometimes occur. Those are animals with genetic anomaly due to which the number of sex chromosomes includes not 2 of them (XY), but 3 (XXY). As a rule such poor cats are germ-free. These creatures are very rare: out of 3000 triple color cats only one would be male.

Calico cats are said to bring luck to their owners. Also, being a happy owner of a triple colored cat you are completely safe because a calico is guarding you from any trouble, be it even… a bear: