Do you know who are bulls and bears? Of course, this is not about zoology 🙂 Speaking of economics and financial markets, bulls and bears – these personages have become classics – represent the two major market forces, buyers and sellers. Initially, such a comparison was used on the stock exchanges, but later it made its way in respect of any other participants in financial markets.

According to The Library of Congress, the bulls and bears term was used for the first time on the stock exchange in 1714 (according to “Country Lassis” by C. Johnson).

Bulls are people buying stock now with the belief the stock (or market in general) is going to rise. Their buying helps drive the prices higher. They are said to be ‘bullish’ on the stock.

Bears are people selling (or short selling) stock now with the belief the stock (or market in general) is going to fall. Their selling helps drive the prices lower. They are ‘bearish’ on the stock. 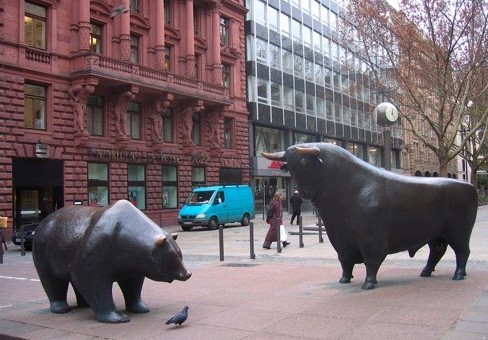 These terms represent the style of attacking of each animal: the bulls attack by thrusting their horns UPWARD, while the bears attack by swinging their claws DOWNWARD.

Tendency of market dynamics is called a market trend. Terms bull market and bear market are widely applied in economics and are used to describe upward or downward market trend. These terms can be attributed to the market as a whole or to its specific sectors. It’s common to associate the state of the market (or economy) with its key players. For example, in a bull market, all is going uphill. The economy is growing, unemployment decreases, GDP rises and stocks are also growing. In contrast, if you hear about the bear market (or bear economy), it means all the opposite: unemployment grows, the GDP is declining, and the share price is lowering too.

Even if all this seems to be dull and inconceivable, don’t get bored immediately. Movie industry has made an effort to build this theme up to the world. In the US, dozens of films about stock exchange, its ups and downs, bulls and bears, were produced within past decades. Be sure, stories like Wall Street (1987), Margin Call (2011) and The Wolf of Wall Street (2013) will grasp your attention, and hey they can inspire you to write academic works on the topic.

so, who was Belfort in Wolf of Wall street? First bull then bear?