The fastest camera in the world can see the movement of ultra-short light pulse through the one liter bottle, just as conventional high-speed camera shoot bullets’ pass through the apple in detail.

A unique system was created by Ramesh Raskar from the Massachusetts Institute of Technology and members of his laboratory Camera Culture with the participation of Bawendi Group. Raskar is known to us for the camera that shoots around corner. It is, incidentally, is a close relative of the new item – they have common elements and similar techniques for working with light. 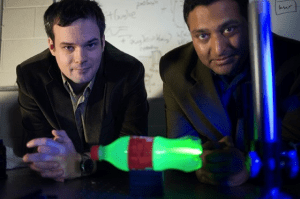 The experimenters call the new system Trillion FPS Camera. However, in practice the effective exposure time of each frame is then 1.71 picoseconds (trillionths of a second), so that the device displays the movement of the light on a scene taken with a frequency of “only” 0.58 trillion frames per second. Another method of slow-motion, based on holography (light-in-flight holography), allows to achieve a greater rate – approximately 100 billion frames per second. Alas, this technology is not suitable for all situations, as it works only with coherent light. And its beams loose coherence at once, as soon as they pass through the different objects and that s the reason of the method failure.

The Raskar’s way of shooting shows that the light may be the most common and the laser as a backlight is not used here because of the coherence of initial beam, but because of the need for ultra-short bursts. As a basis for the new system the researchers used streak camera, where the light rays fall on the photocathode through a narrow slit. 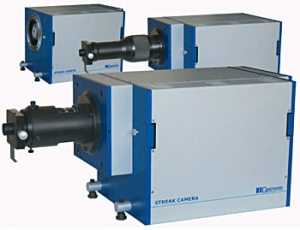 Ejected electrons by rapidly changing electric field are deflected in a direction perpendicular to the slit. Then they fly to the detector. In this way, timebase of light short pulse is converted into a space one. The before arrived photons are reflected in the detector in a slightly different position than the particles arrived a little later. The images extracted with the help of such camera are obtained two-dimensional, but one dimension in the frame is space one (it is located along the slit) and the second is the time. To fix the scene in full, the inventors used a slowly rotating mirror that directs the view of a slot camera on the new and new lines.

To shoot a whole movie the run of the wave front along the stage should be repeated millions of times. And so the relative position of light stripes in the frames was correct, the pulses of lighting laser (frequency of repetition rate is 13 ns, the pulse width is a few femtoseconds) and detectors functioning must be accurately synchronized. The latest perceive the reflected from objects light with a time resolution of about one picosecond. 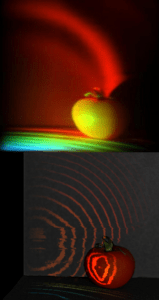 Sophisticated optics and electronics needed for the synchronization of all parts of the complex, just up the secret of “trillion camera.” It is important that the recorded objects remain stationary, so that the picture of rolling on them light impulses is always the same. This allows shooting of one conceived scene within a few minutes (during this time the scanning mirror takes a lot of narrow lines in the field of camera view). If you go back to the analogy with a bullet and the apple, in this case, the scientists like get in the final video its one pass on the screen after a million attempts – the apple is just “shot from the gun.”

The further processing of the huge array of information (the photons’ location and the time of their fixation in the detector) is given at the mercy of the computer. Invented by Ramesh and his colleagues mathematical algorithms are used to generate from such data a resulting video, which consists of only 480 frames. It is easy to calculate that for the entire film (it shows us the event unfolding over the 0.8 ns), the light beam has time to run around the scene about 25 centimeters, and in one frame – about half a millimeter. Andreas Velten, one of the authors of this system, calls it “ultimatum”, because “There is nothing in the universe with just a speed glance, as in this camera.” Its creators also emphasize that they were inspired by the shootings of flying bullets, the first conducted decades ago. Then the photoflashes, available in those years, were the key to stopping moments.

Today’s innovators are in general use a similar approach, except that now light flashes became in a billion times shorter. Raskar calls such impulses “light bullets”. Particularly impressive they look in that first experience with a bottle. Camera at a trillion frames per second Ramesh offers to use for shooting educational films that show familiar things in unusual directions.

But while the trillion of frames is just an experiment and it is expensive. Only impulse laser and ultra-fast streak camera used in the experiment together cost $ 250,000. There Raskar relies on the technological progress, which will in the future reduce the size of the optical components of such systems and cut their price.