Telephone communication has so deeply penetrated into our environment that we cannot imagine our life without it. Pick up the phone, dial a number and hear the voice of a friend or a beloved. What could be simpler? But behind this the great work of physicists, engineers, electricians and people of other professions was done. 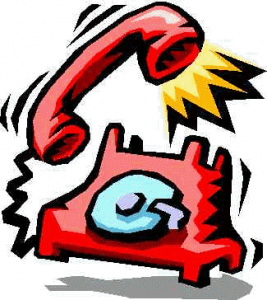 In 1947 an event occurred which was the starting point for creating a cellular communication. The employees of Bell Laboratories, Douglas H. Ring and W. Rae Young, put forward the idea of the principle of cellular organization of mobile communication networks. The engineers suggested the basic ideas that still lie at the heart of modern cellular networks.

To create a network it is necessary to get a set of frequencies or frequency band. This is where the base station will communicate with your mobile terminal. The principle of frequency reuse is considered as the basic principle of cellular networks. That is it allows to significantly increase its capacity and to cover virtually unlimited space, applying the finite set of frequencies. Have a look at the image. 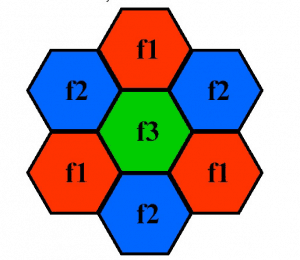 The picture is extremely simple. However, in practice, engineers are faced with serious problems. Indeed, to paint cells’ boarders with hundreds of thin straight lines is possible only on the paper. The real landscape, especially urban, imposes severe restrictions on the geometry of the coverage area of ​​each base station. Therefore, the actual coverage can be verified only by experiment. Since the number of points in space is infinite, then to check them all is impossible. Even if to approximate every location of space in the base station coverage to the cubic meter, the work is not feasible. Hence, there is an appearance of white spots on the coverage map and locations with active interference, which leads to disturbances.

Let’s come back to the interference phenomenon and figure out its impact on the mobile communication.

At the cellular network organization it is important to be able to calculate signal characteristics at any point in space within the entire service area in order to determine the optimal installation location and the number of base stations as well as for other tasks solution. The urban environment creates specific conditions for the propagation of radio waves. Shadow zones, multiple reflections and scattering of waves form multipath fields with a complex interference structure and sharp spatial variations in signal level. The multipath nature of radio wave propagation, when the waves are coming at the reception point from different directions and with different time delays, generates the phenomena of intersymbol interference in the transmission of code sequences. This is an unwanted phenomenon as the noise, thus making the communication less reliable.

Signal distortion due to the intersymbol interference can cause serious deterioration of system performance and quality of high-speed digital data transmission, if the duration of the delay exceeds the duration of the symbol. A deep knowledge of the characteristics of the multipath propagation channel is a prerequisite for the development of effective communication systems, operating in an urban environment.

Any radio paths can be represented as a set of several basic ways in which the signal from the antenna of the base station comes to the antenna of mobile phones and vice versa. At each of these paths there are different items that affect the propagation of radio waves. In urban areas the following main elements could be outlined:

The entire frequency band in the surrounding environment is a public resource, which in theory can be accessed by anyone. However, during the simultaneous transmission in the same frequency range just the same will occur as if several users talk over the same phone at the same time, i.e. the signal overlapping or interference will occur. Interference in the radio space will degrade the quality of the connection, some errors and overrequests will always arise and, ultimately, this will lead to a disconnection. In order to prevent interference, the entire frequency band is divided into bands. In cellular communications, for example, the bands of 800 MHz, 900 MHz, 1800 MHz, 1900 MHz, 2100 MHz, and some others are used depending on the standard and the country. The number in the name of the band does not point to the beginning, end or a width of a frequency band. This is just a code name, while frequencies are located in the vicinity of a given frequency.

Thus, for cellular communication the most valuable band is of 900 MHz, then 1,800 MHz. This is due to the fact that the frequencies of 900 bands are less attenuated during the passage through walls, roofs of houses and other obstructions, and also propagate to long distance. In order to protect oneself from the interference the frequency planning is used, which is usually carried out even before the construction and launch of the network.