In 2006, the group of Californian theoretical physicists has made an interesting prediction, according to which “sandwich” of the semiconductors with a thin layer of mercury telluride (HgTe) in the middle the electrons will behave in a very unusual way, showing the spin Hall effect. In 2007 the corresponding sandwich was made by ​​experimental physicists from Germany. And they find in it exactly what was predicted by their counterparts from California. 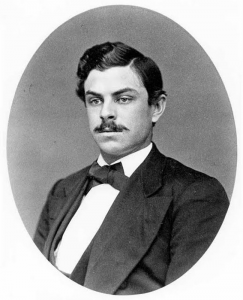 By analogy with the ordinary effect so-called spin Hall effect is possible, which means the causing the flow of the spin perpendicular to the electric current. The electrons of opposite spin are acted by forces, that are deflecting electrons in opposite directions, which leads to the accumulation of spins at the edges of the sample in the absence of an external magnetic field (Fig.1b). This effect was predicted by Russian scientists M. Dyakonov and V. Perel in 1971, and their perennial searches, finally succeeded in the autumn of 2006 (David Awschalom Laboratory of University of California at Santa Barbara).

One of the consequences of the external scattering asymmetry is the anomalous Hall effect that occurs in ferromagnetic materials: in such environments, the electron current is spin-polarized and multiple scattering of the carriers leads to the fact that the electrons are deflected in the direction perpendicular to the direction of the applied voltage, creating charges of opposite values on the side edges of the sample. In a paramagnetic material, the same mechanism will lead to scattering of electrons with spin up and down in various directions. Since the number of both electrons in a paramagnetic material is the same, the accumulation of spin polarization at the side edges of the plate will not be accompanied by an accumulation of charges. If we now connect the side edges of the plate with second conductor, then spin current, induced by the non-equilibrium spin density, should leak on it (Fig. 2).

Figure 2. The scheme of experiment on discovering the spin Hall effect.

This current can be detected by the electric voltage occurred between the side edges of the second conductor, due to the anomalous Hall effect. The magnetic field applied in the plane of the plates, should lead to a suppression of spins and precession of the spin Hall effect in that case if the period of spin precession will be less than the spin relaxation time.

Thus, the spin Hall effect manifests itself in the heavy metals: the electrons with spins oriented at different angles, are deflected in different directions. An electric current makes side-spin currents, which can be absorbed by an adjacent magnetic layer, switching its polarity. In this case, the polarity continues to maintain its value, even in the absence of current, i.e. the memory is nonvolatile.

The Hall effect allows creating local channels of superconductivity in the most ordinary conductors by placing a conductor in an extremely strong magnetic field. The spin Hall effect can create similar channels, because of the electrons’ groups’ connection on the spin, and without the use of extreme magnetic fields. This effect can be widely used in the new burgeoning field of microelectronics – spintronics, which uses the transport properties of spin-polarized electrons. And the fact that the scientists were able to reproduce this effect within the laboratory experiment allows hoping for a speedy establishment of the conductors, preserving the superconducting properties at room temperature, and with them – cost-effective and high-speed computers.