Today, we clearly understand that the assimilated sources of energy (coal, oil, gas, for example) will soon be depleted. The nuclear power stations can provide us with energy for hundreds of years, but they have a serious disadvantage – a huge amount of radioactive waste with a long half-life that remains during its work. That’s why we try to find the alternative sources of energy and the most promising of them is the controlled thermonuclear fusion.

There are two fundamentally different approaches to obtain the controlled thermonuclear fusion. The first one is the inertial confinement fusion. The idea is to put a few milligrams of deuterium-tritium mixture in a capsule of 1 – 2 mm diameter. Then, the pulse radiation of several tens of powerful lasers is focused on the capsule. The capsule evaporates immediately, and if we can give 2 MJ of energy in 5 – 10 nanoseconds to radiation, then the light pressure will compress the mixture and the reaction of thermonuclear fusion will begin. As a result of the reaction of thermonuclear fusion a power, which is equivalent to the explosion of 100 kg of trotyl, will be released. We can convert the released energy in more convenient form, for example, in the electric power.

The second one is called the magnetic confinement fusion. The deuterium-tritium mixture is ionized and heated to a temperature comparable with the temperature in the center of the Sun. During the ionization process, the mixture brings into the fourth aggregate state – the plasma. In order to heat the deuterium-tritium mixture to the temperature of hundred million degrees Celsius, the current of 20 million amperes passes through the plasma. It is clear that we must isolate the mixture in the center of the chamber because the walls will not sustain such temperatures. We can keep the plasma from contact with the walls of the chamber by the magnetic field.

In a uniform magnetic field, the charged particles move in circles and don’t fly apart. The difficulty lies in the creation of the uniform magnetic field. Theoretically, it arises in the infinite solenoid that wound with a coil in which a current flows. In practice, the infinite solenoid can’t be realized and we have to choose one of the three options.

1) The solenoid of finite length encapsulates with electric or magnetic mirrors – an additional field which return the particles inside the chamber. Such devices are called open traps.

2) The solenoid is rolled into a torus. It has no ends and the magnetic field is inhomogeneous: it is stronger near the inner wall and weaker near the outer one. The charged particles will drift to the place where the field is weak and fly through the outer wall. To avoid this, we can pass a direct current through the plasma that will create a vortex magnetic field – twisting the particles flying away it will return them to the inner wall. The magnetic field, perpendicular to the direction of the field in the solenoid (poloidal field), is obtained using the additional electromagnetic coils. The poloidal field also returns the particles that approach to the outer wall inside the chamber. Such devices are called tokamaks. 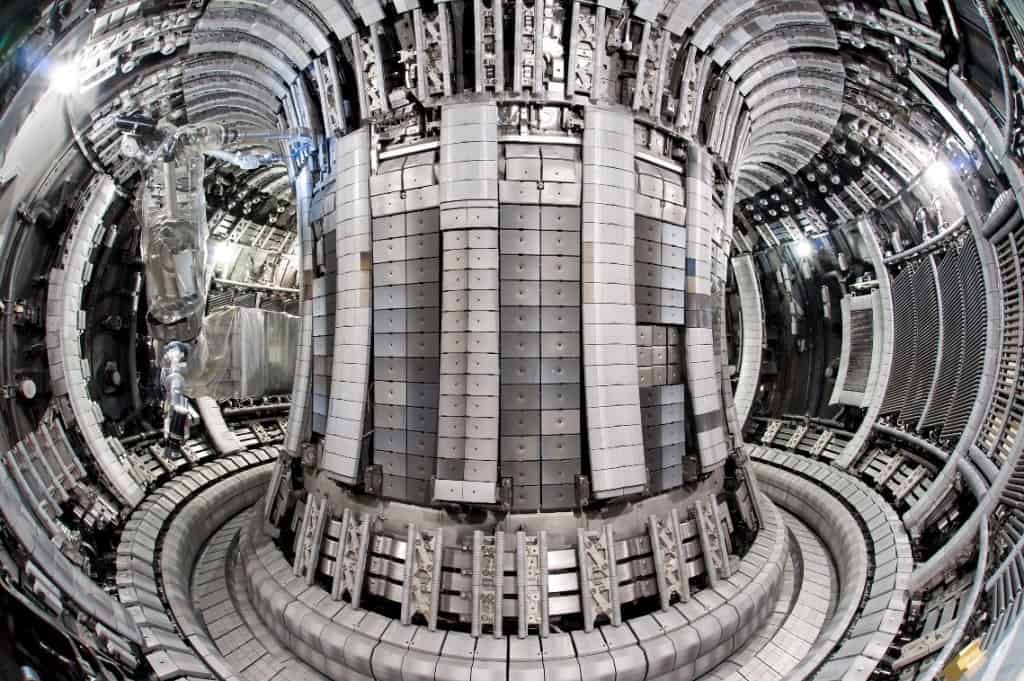 3) We can allow the particles to move in a natural way and give the form to a chamber that repeats their trajectory. The chamber will take a bizarre look and the magnetic field created by the external coils will look much more complex than in the tokamak. Such devices are called stellarators. Effective examples of this construction type appeared has appeared in recent years because the complicated calculations of coils’ shape require powerful computer simulation. The latest achievements in the stellarators constructing are represented by the Wendelstein 7-X stellarator in Germany. Construction  process of the Wendelstein 7-X is shown in the movie below:

Meanwhile, it is difficult to say which option will lead to success. The first the greatest success was achieved by a tokamak. In 1968, the Soviet tokamak T-3  heated up the plasma to the temperature of 10 million degrees Celsius. Then, in 1997, the tokamak JET (Joint European Torus) near Culham, Oxfordshire, United Kingdom achieved a world record peak fusion power of 16 MW. The ratio of fusion power produced to input heating power (Q) is approximately equal to 0.7. However, this is not enough for a self-sustaining burning plasma because 80% of the produced energy is lost. We need to produce five times more energy (Q=5) than we spend on the plasma heating and creation of the magnetic fields. And if we speak about a power plant, it requires at least Q=10. In 1998, the engineering project of the ITER (International Thermonuclear Experimental Reactor) Tokamak was completed  and in 2013 the construction of the ITER Tokamak complex started. It is expected that the construction of the former will be finished by 2019. Then in 2020, the plasma experiments will start. The full deuterium-tritium fusion experiments will be able to start by 2027.

At the present moment, the tokamaks have the serious competitors. However, the construction of the stellarators and inertial fusion plants encounters serious technical difficulties. It is clear: even if we are able to use the fusion energy for the production of electricity, it will not be cheap. Nevertheless, thermonuclear fusion has huge advantages comparing to the other energy sources. And we hope that in the 2030s we will already have the first thermonuclear experimental reactor that will be able to produce the electricity.