The whole world has been following the news about the most dangerous diseases caused by such viruses as Ebola, human immunodeficiency virus (HIV) and hepatitis C virus (HCV). Even the word “virus” is associated with something horrible and hazardous, and has nothing in common with lord Varys. Recently scientists have invented a new method for identification of past and current viral disease using only one drop of blood.  But did you know that not all viruses are that bad for us? In fact, scientists have been gathering more evidences about positive effects of some viruses (i.e. herpesviruses) on our health. Recent studies based on new experimental results confirm the importance of retroviruses in the placenta formation and embryonic development. So, let’s talk about what viruses are and what benefits they have.

Viruses are the tiniest noncellular organisms, though some scientists consider them as nonliving things. Remember that bacteria are cellular organisms and they are not the same. Viral particles (virions) are from 10 to 300 nanometers in diameter (one nanometer is a million part of the millimeter!) consisting of the nucleic acid (DNA or RNA) surrounded with protein and sometimes lipid coat. Viruses cannot multiply themselves, that’s way they use cellular organisms to replicate their DNA or RNA and to synthesize new virions. Thus, the main purpose of the virus life is to replicate viral parts as many times as possible. In this way, virus replication exhausts cell resources while the burst of the virions destroys the cell causing different diseases. 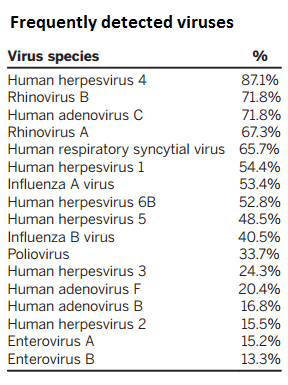 New method called VirScan for virus identification in blood was invented recently. Only for about $25, you will find out that your body is a home for more than ten types of viruses which have passed through it or are present there now. The method showed that each tested donor contained antibodies to an average 10 kinds of viruses among 206 analyzed kinds, while in several persons from 62 to 84 (!) types of viruses were detected. You can learn the most frequently detected viruses in the human body from the table:

This doesn’t come as a surprise cause some of them are beneficial for you. Let’s say, some retroviruses, for example. Retroviruses are called so due to the stage of their replication (reverse transcription), when RNA code is transformed into DNA code but not due to any connection with the retro style. Their DNA is integrated into the chromosome and becomes an endogenous retrovirus (ERV). Human genome contains 8% of viral DNA! Scientist discovered the importance of these ERVs in the placenta formation. Providing the exchange of substances between embryo and mother’s blood, this structure consists of the fused embryonic cells (trophoblasts) and mather’s uterus. Fusion of trophoblast cells is possible due to the presence of viral protein (syncytin) on their surface encoded by endogenous viral DNA.

Recently researchers at the Stanford University School of Medicine showed in their research that viral particles of ERVs are present in the blastocysts on the early stages of the embryo development. Viral proteins were found to regulate gene expression in the embryonic stem cells. In particular, they increase the embryo defense activity against other viral infections. So, take a minute and thank not only your mother but also the endogenous retroviruses for our life. Done? Let’s go further. Another group of scientists showed that retroviruses play important role in the brain development and the behavior formation. 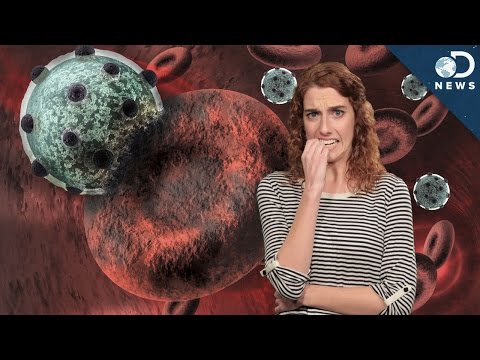 Other examples of viral benefits:

Since 1892, the time of the viruses discovering (yes, biological viruses were discovered much before the invention of the computer viruses, but have really much in common), scientists have learned a lot about them and even have found some benefits. Researchers suggest that viruses made a great contribution to the evolutionary changes of biological species and a biosphere. Furthermore, good side of viruses can be used to kill cancer cells and for specific drug delivery. Successful laboratory and even clinical experiments based on these studies are carried out all over the world. So, don’t believe everything you hear about viruses, some of them can be your friends!