Bright light of fluorescence charms with all its magic and mystery. Some marine animals (i.e. jellyfishes) synthesize fluorescent proteins making them shine in a moonlight. Scientists don’t know the natural purpose of such adaptation but they have learned how to use this exciting chemical feature in scientific work. Researchers have been widely using fluorescence in different fields of life sciences. Two Nobel prizes in Chemistry were awarded for the study and practical use of fluorescence in 2008 and 2014. What are the great benefits of fluorescence? How did a single jellyfish protein change scientific approaches in biology and medicine? Let’s learn it from this article.

Some molecular (macromolecular) systems can absorb light with high energy (but with low wavelength). This excitation light transforms electrons in atoms into an excited state. The system is unstable in such conditions and needs to move back to the ground state. That’s why electrons move immediately back to the ground state while the excess of energy is released by the system in a form of photon (light) with less energy than excitation light. The released photons with longer wavelength (less energy) is a visible emitted light. So, if there is an excitation light – there will be an emitted light. No excitation – no fluorescence.

Fluorescence is a widespread property of organic compounds containing several complex aromatic structures. Furthermore, such structures are present in natural proteins found in different aquatic animals and are called biofluorescence. First extracted biofluorescent molecule was green fluorescent protein from jellyfish Aequorea victoria. The significance of this process in the life of marine animals is not determined. After discovery and study of molecular structures of fluorescent molecules scientists started to use them widely in science and medicine. Scientist use fluorescent tags to mark cell structures and even have modified some laboratory animals (fishes, mice, rats, rabbits, pigs!) using GFP to make them fluorescent. Don’t worry, these gene modifications don’t harm animals. Hey, would you like to have a pet shining green?

In fact, two Nobel prizes were awarded for the investigation of properties and practical application of fluorescence in life sciences: “For the discovery and development of the green fluorescent protein, GFP” in 2008 and “For the development of super-resolved fluorescence microscopy” in 2014. These and other studies improved the ability to analyze live cells or even organs visualizing them with a method for protein marking, using different fluorescent proteins (i.e. GFP) or chemicals (i.e. fluorescein). For example, scientist invented a technic called CLARITY to produce 3D models of brain visualizing its structure using fluorescent staining of neurons. This method gives an opportunity to study neuronal diseases and disorders in three dimensions. 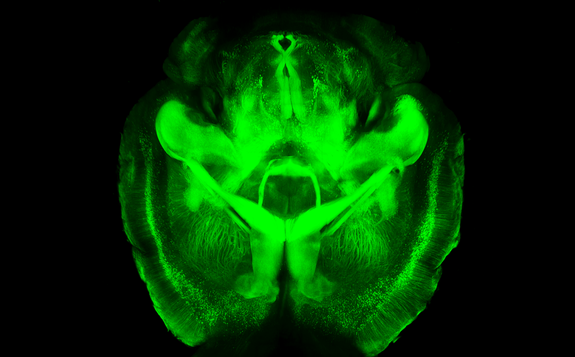 And well, to enjoy the fluorescence, you don’t need to catch fluorescent jellyfishes or genetically modify your pet. You can easily use some available chemicals and your free time to do interesting scientific experiments for fun. For example, washing powder contains fluorescent granules makes your white cloth shine in UV light; “Schwepps” beverage contains quinone that is also able to become fluorescent. Using these and some other simple things you can surprise friends and make cool bright photos.

Fluorescence is not only complex physical process in molecules. This is a powerful tool in scientific researches for visualizing tiny components of biological systems, their movements or properties. This phenomenon of chemical compounds and biological species charms as the physical process of the north light. Furthermore, you can easily have fun with fluorescence using available chemicals. Furthermore, you can have a fluorescent pet.