People got used to such large-scale changes as the redrawing of the continents or climate that occur slowly. It is difficult to assess them by one generation, and sometimes just to see them. However, there is a discovery: a grand event – the upheaval of the magnetic poles – maybe even for a man almost instantly. And such a focus home planet can wrap up before our very eyes.

The below picture shows the inner (red) and outer (yellow) core of the Earth, the magnetic field lines (blue), the streams of metals (brown line) caused by the rotation of the core (black arrow), and convective streams (light brown arrow). 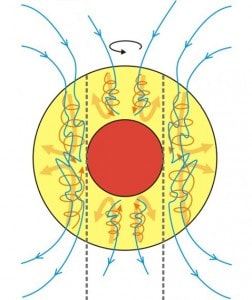 The change of the Earth’s magnetic poles (the geomagnetic reversal) occurs every 11.5-12.5 thousand years. The other numbers are also mentioned – 13,000 years and even 500 000 years or more, and the last reversal occurred 780,000 years ago. Apparently, the reversal of the Earth’s geomagnetic field is a non-periodic phenomenon. Throughout the geological history of our planet earth’s magnetic field changes its polarity more than 100 times.

The cycle of change in the Earth’s poles (associated with the planet Earth itself) can be attributed to the global cycles (along with, for example, with the fluctuations’ cycle of the precession axis), influencing everything that happens on Earth … The question naturally arises: when will the change of the Earth’s magnetic poles (the Earth’s geomagnetic reversal), or the displacement of the poles at the “critical” angle (according to some theories on the equator) be?.. 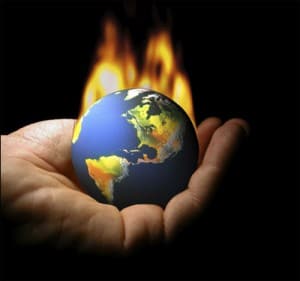 The process of displacement of the magnetic poles has already been registered more than a century. North and South Magnetic Pole (NMP and SMP) constantly “migrate”, moving away from Earth’s geographic poles (the angle of “error” is now about 8 degrees of latitude for NMP and 27 degrees for SMP). By the way, it was found that the geographic poles of the Earth are also moving: the axis of the planet is rejected at a speed of about 10 cm per year. In recent years, the speed of displacement of the magnetic poles has increased dramatically: since the North Magnetic Pole “ran” for the past 20 years, more than 200 kilometers, it now moves to the north and north-westerly direction at a speed of 40 km per year! 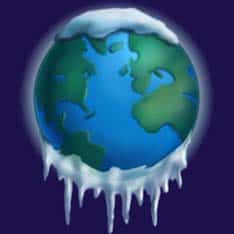 The fact of the weakening of the geomagnetic field near the poles, which was established in 2002 by a French professor of geophysics Gauthier Hulot, indicates a quick change of the pole. By the way, Earth’s magnetic field weakened by almost 10% since it was first measured in 30s of the 19th century. Fact: In 1989, residents of Quebec (Canada) due to the fact that solar winds broke through a weak magnetic shield and caused severe damages to electrical grids, remained for 9 hours without light. 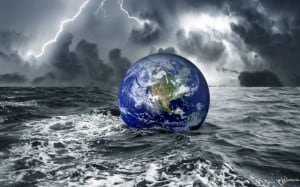 Scientists (as well as world leaders …) know about the upcoming change of the poles of the planet Earth. The process of changing the poles of our planet (the active phase) started in 2000 and will run until December 2012. Incidentally, this date is specified in the calendar of the ancient Maya as a “doomsday” – Apocalypse?! Here we must add that on the August 11, 1999 there was a solar eclipse and the parade of planets, the Earth entered to a new era – Age of Aquarius (Age of Pisces is over), which will last for 2,160 years … In 2013, the planet Earth will completely enters the constellation of Aquarius … and there will be a change of the magnetic poles of the Earth, which will take only a few weeks (a hard version). Some scientists predict the onset of the apocalypse till 2030, and some experts say that the displacement of the poles will take about thousand years (a soft version) … There is also a version that the reversal will result in a displacement of the North and South poles to the equator.

So the forecasts with respect to developments in the world after the change of the poles are different. They differ in terms of restructuring the planet on a new life (the arrival of the New Time), as well as the extent of planetary catastrophe. And much will depend on the person. Thus, there is a question of what awaits for a humanity in the future?..

Therefore a possible temporary disappearance of Earth’s magnetic field and the Flood can cause enormous losses of life, the terrible man-made disasters (a hard version). Only those will survive, who are physically and, most importantly, spiritually (!) ready for the coming New Age. Earth of the Age of Aquarius (after its “reset”, i.e., geomagnetic reversal) will show different requirements for a person, as it enters the next stage of its development…

The fact of “purification” of the Earth from the “excess burden”, “information mud” is worth to be noted. Recently, a wave of violence, racial and religious intolerance, cruelty, and … suicides is observed on our planet. The moral decline of society, inextricably linked with the Earth (global processes on the planet) is one of the harbingers of impending disaster: the aggravation of these symptoms in the society is the result of processes of the Earth’s transition to a new development level…

That’s why depending on how humanity will be able to meet the coming New Age the scenario of threatened planetary catastrophe will be clear. The lower the society will fall, the harder will be the reaction of the Earth. It may be that everything goes “smoothly”, and it is possible that only the “chosen” will stay on the Earth… In the meantime, there is increasing of speed of the magnetic poles’ displacement, which does not look like the usual, “background” drift.