How many pairs of rabbits will be produced in a year, beginning with a single pair, if in every month each pair bears a new pair which becomes productive from the second month on?

This problem can be illustrated in such way: 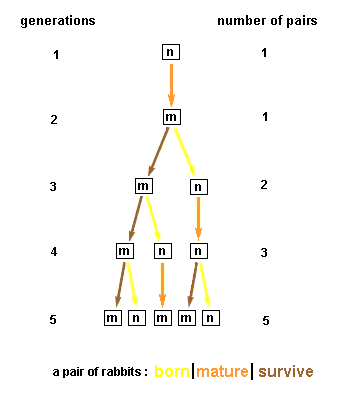 Suppose a pair of rabbits, one male and one female, start a family. Rabbits mature at the age of one month (labeled “m”) and a female produces a new pair of rabbits (labeled “n”) at the end of its second month. Suppose that the rabbits survive forever and that a female always produces one new pair (one male, one female) every month, giving the original pair and a new one.
It is easy to see that 1 pair will be produced the first month, and 1 pair also in the second month (since the new pair produced in the first month is not yet mature), and in the third month 2 pairs will be produced, one by the original pair and one by the pair which was produced in the first month. In the fourth month 3 pairs will be produced, and in the fifth month 5 pairs. After this, things expand rapidly, and we get the following sequence of numbers:

This is an example of a recursive sequence, obeying the simple rule that to calculate the next term one simply sums the preceding two:

The Fibonacci sequence can be obtained as a sequence of ratios of consecutive Fibonacci numbers:

This sequence converges, that is, there is a single real number which the terms of this sequence approach more and more closely, eventually arbitrarily closely. The value of it equals to

This number was known to the ancient Greeks and was called by them the Golden Mean. It is usually denoted by the Greek letter φ (phi), and sometimes by μ (mu). They believed that the proportion φ:1 was the most pleasing, indeed the aesthetically perfect proportion, and all of their artwork, sculpture, and especially architecture made use of this proportion. A rectangle whose sides had this proportion was called the Golden Rectangle.

The Fibonacci series is defined recursively. That is, in order to find each term of the series using the definition, you have to find all the terms that precede it. This makes finding the n-th term very difficult for large values of n, as you must find every term that comes before.

However, there could be a way to find Fibonacci numbers without using the definition. If this were possible, one would be able to find the nth term of the series simply by plugging n into a mathematical formula. You can use the Binet’s formula, Binomial approximation, and the Successor Formula which are derived by famous mathematicians to achieve these purposes.

The Fibonacci numbers are well-used in many branches of Science and can be found in the Nature: