Answer to Question #199869 in Electrical Engineering for A jaif

The circuit shown in Fig.5 is applied with a 240 V, 50 Hz supply. Find thevalues of R and  C so thatVb=3Va and Vb and Va are in phase quadrature 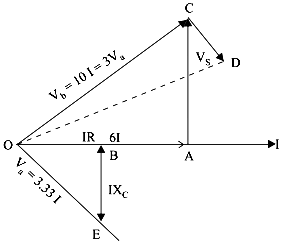 Angle between V and I

In the phasor diagram, I have been taken as a reference. Vb is in the first quadrant. Hence Va must be in the fourth quadrant since Za consists of R and Xc. The angle between Va and I is then 36.87°.

Since Za and Zb are in series, V is represented by the phasor OD which is at an angle of

Thus, the circuit has a total effective impedance of 10.53 ohms.

In the phasor diagram,

Angle between Vs and I =

New on Blog
APPROVED BY CLIENTS
Love love love this site and the professional who helped. I like that you can send messages back and forth and stay in touch with what’s going on.