Answer to Question #199866 in Electrical Engineering for richard gate

As a student of Electrical Circuit Analysis at Accra Institute of Technology (AIT), you have been tasked to analyze a linear active, bilateral two terminal network to be implemented at SEAVIEW campus containing impedance and voltage source using Thevenin’s theorem. Demonstrate with diagrams and derived formulas including that for the load current to analyze the circuit.

According to Thevenin's Theorem, "every linear circuit including several voltages and resistances may be substituted by a single voltage in series with a single resistance linked across the load." In other words, any electrical circuit, no matter how complex, can be simplified to an equivalent two-terminal circuit using only a single constant voltage source in series with a resistance (or impedance) coupled to a load.

For example, consider the circuit below

To begin analyzing the circuit, we must remove the center 40 load resistor connected across terminals A-B, as well as any internal resistance related with the voltage source (s). This is accomplished by shorting out all of the voltage sources connected to the circuit, resulting in v = 0, or by open circuiting any attached current sources, resulting in I = 0. The rationale for this is because we want to have an optimal voltage or current source for circuit examination.

Calculating the total resistance looking back from terminals A and B with all voltage sources shorted yields the value of the equivalent resistance, Rs. As a result, we obtain the following circuit. 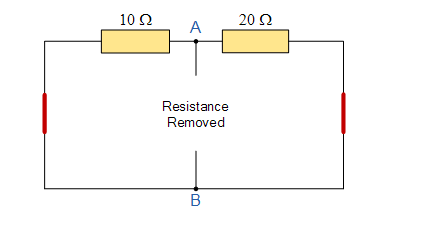 The voltage Vs is defined as the total voltage across terminals A and B when they are connected in an open circuit. That is, the load resistor is not connected.

Determine the Equivalent Voltage (Vs) 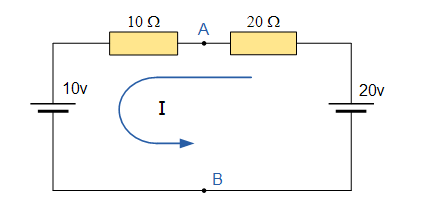 We must now link the two voltages to the circuit, and because , the current traveling around the loop is computed as follows:

Because this current of 0.33 amps (330mA) is shared by both resistors, the voltage drop across the 20 resistors or the 10 resistors may be computed as follows:

Thevenin's Equivalent circuit would thus be composed of a series resistance of 6.67Ω and a voltage source of 13.33v. When we reconnect the 40Ω resistors to the circuit, we get: 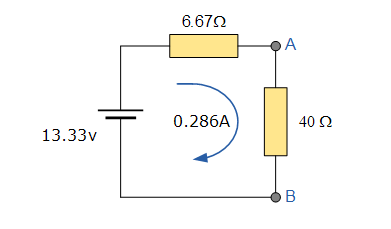 New on Blog
APPROVED BY CLIENTS
The assignment was excellently done at a reasonable price. I will definitely recommend this platform to my peers.