Answer to Question #110006 in Mechanics | Relativity for anthonyamaro

The figure shows a weathered rock on a slope with an inclination of "\\alpha" to the horizon. 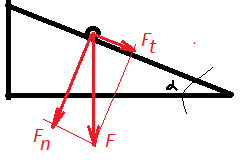 Gravity acts on a soil particle strictly upright, but in this direction soil particle relies on the layers below. However, if this force is decomposed into two components, one "F_t" along the slope, and the other "F_n" perpendicular to the surface of the slope, it becomes clear that it is the force along the slope that has no reaction and can cause rolling. It can be seen from the figure that "F_t" is the leg of the right triangle opposite the corner "\\alpha", and "F" is its hypotenuse. Thus "F_t=F\\cdot sin\\alpha" is a component of the gravitational force pulling the particle downward along the land surface. When the angle of the slope "\\alpha" is small, this force is small and changes proportionally "F_t\\simeq F\\cdot \\alpha" . When the slope becomes large, it more and more approaches to gravitational force of the particle and almost ceases to depend on the slope.

Answer: The gravitational force pulling the particle downward along the land surface vary with the inclination of the slope as "sin\\alpha"