Answer to Question #102994 in Mechanics | Relativity for Earlicia

2020-02-14T03:42:39-05:00
Answers>
Physics>
Mechanics | Relativity
Question #102994
Imagine that you want to shoot an apple hanging in a branch with an arrow. You aim the arrow and at the exact time you shoot it, the apple falls from the branch. Will it hit? It should still hit the apple if the air resistance ( wind) is negligible that day. Why will the projectile always hit the falling object it is aimed at if it is fired at the same time the object starts to fall? Think about this problem in terms of projectile motion.
1
Expert's answer
2020-02-18T10:15:56-0500

On the apple and the arrow, there is force acting on it, called the force of gravity. So, as we are shooting the apple, at the same time the apple are free to fall.

So, we have to shoot it at some angle, height leave by both the apple and bullet will be same then It will hit the apple. 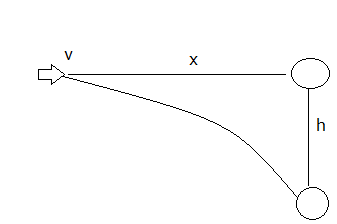 Let the distance between the apple pistol is x, and both are at the same height,

So, height approached by both the bullet and the apple is same.