Answer to Question #215480 in Mechanical Engineering for anis

Give another example of a crystalline material (both natural and synthetic type) that has similar mechanical and thermal properties as diamond, briefly explain and compare the material with diamond. Your comparison should include the type of bonding, crystal structure, and the melting point of both materials with the support of images.

Suitable specific material suggested to be compared with diamond, with a comprehensive explanation

Moissanite, a silicon carbide that occurs naturally, is nearly as hard as diamond.

Moissanite rings are all the same brightness, fire, durability, clarity, and quality. The only variation is the hue, which is why there are several grades of moissanite. Different grades are assigned based on the color of the item.

Moissanite's crystalline structure is kept together by strong covalent bonding, comparable to diamonds, and it can endure pressures of up to 52.1 gigapascals.

Moissanite is a hexagonal crystal that is found most often in the 6H hexagonal structural system. It does, however, belong to the space group P63mc, which describes crystal symmetry. Moissanite crystals form as inclusions in other minerals. 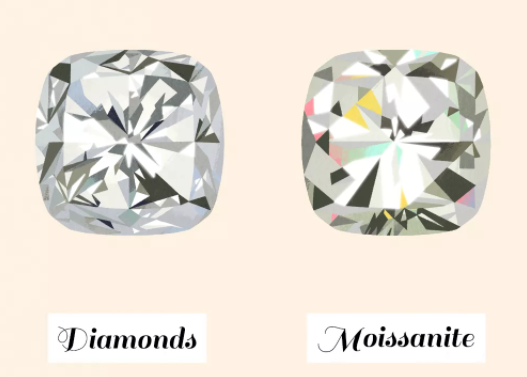