Answer to Question #231924 in Electrical Engineering for khanya

XXX company requires an impulse generator with a maximum charging voltage of 120 kV. As a technologist, you are requested to design an n stage impulse generator that will have a maximum charging voltage of 120 kV with each condenser rated at 125 kV.. You are requested to provide the following for your design: 1. The number of stages for the impulse generator  8 ≤ n ≤ 10 The selection of the number of stages should be scientifically motivated. 2. Rated capacitance of each condenser. 3. Maximum output voltage 4. Simulations of the impulse generator for at-least 10 seconds. You are also require to provide simulations for 5 % and 10 % deviation of the test specimen’s rated capacitance. 5. Detailed report During engagements with hte company, it is further established that the capacitance of the test specimen is 1000pF. The

Abstract: This project aims to create a lightning waveform using OrCAD PSpice software following the IEC61000-4-5 standard. As a result, the Marx generator has been adopted as the design's fundamental idea, with some settings and components modified. The simulation's output waveform was compared to the IEC61000-4-5 surge standard, and the values in the created circuit were changed to keep the waveform's characteristics within acceptable bounds. Consequently, using an impulse generator circuit and the OrCAD PSpice program, the right lightning waveform in the form of voltage against time was constructed.

Introduction: For the surge, there are various types of impulse ratings. There are two types of impulse ratings for lightning surges that are used to model what can happen in real-life surges. Impulse voltage and current surges are the two types. The impulse is provided to a test object to ensure that it can tolerate high voltage and high current surges. Many waveforms can be created while determining the waveform for a lightning impulse, such as 8/20s and 10/100s. 8/20 s for impulse current surge and 1.2/50 s for impulse voltage surge are the most commonly employed. Lightning-induced surge currents are distinguished by their fast-rising "front edges" and long-decaying "tails."The first number in the surge waveforms, to a first approximation, shows the time it took for the surge to reach 90% of its peak value, while the second number indicates the time it took for the surge to decay from its peak to halfway value. It could just mean (tp/tf) s or be written as such.

Orcad solutions provide a complete solution for core design tasks such as schematic and VHDL-based design entry, FPGA and CPLD design synthesis, digital, analog, mixed-signal simulation, and printed circuit board layout. The Orcad family is more than simply a collection of independently produced point tools; it's a suite of apps built around an engineer's design flow. Orcad Capture is only one part of the whole solution design process.

Marx proposed the arrangement of charging the capacitors in parallel and then connecting them in series for discharging.

The charging resistance Rs is usually chosen to keep the charging current between 50 and 100 mA, while the generating capacitance C is chosen to keep the product CRs between 10s and 1 minute. Compared to the charging time constant CRs, which will be a few seconds, the discharge time constant CR1/n (for n stages) will be too little (microseconds). The total voltage (nominal), the number of steps, and the gross energy stored is used to rate impulse generators. The charging voltage multiplied by the number of steps gives the nominal output voltage.

The nominal energy stored is given by:

The discharge capacitance, C1 given by:

where; C = capacitance of the generator

Calculation for one stage Marx generator:

From standard waveform of Marx generator,

where Tr and Tf are time constant. 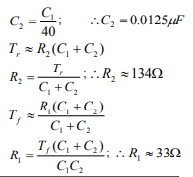