Answer to Question #200076 in Electrical Engineering for Angela

With the aid of a suitable diagram describe the characteristics and principles of operation of a DC electromagnetic generator, give a real life example.

Note: You should include with your description a labelled diagram of the DC generator and describe the action of each major part.

• With the aid of a suitable diagram describe the characteristics and principles of operation of an AC electromagnetic generator, give a real life example.

Note: You should include with your description a labelled diagram of both the AC generator and its generated waveform and describe the action of each major part. 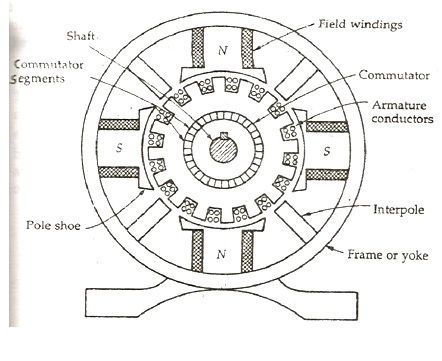 The primary function of a DC generator is to convert mechanical energy into electrical energy. DC generators generate electricity using the basis of Faraday's law of electromagnetic induction.

A DC generator's four most critical components are:

Stator: Provide magnetic fields in which the coils spin.

The rotor, also known as the armature core, is a crucial component of a DC generator.

Commutator: The commutator functions similarly to a rectifier in that it converts AC voltage to DC voltage during the reinforcement of the armature winding.

Brushes: An electrical connection can be ensured between the commutator and the external load circuit. An alternator, also known as an alternating current generator, is a mechanism that transforms mechanical energy into electrical energy. The electrical energy produced takes the form of an alternating current sinusoidal output waveform. Steam turbines, gas turbines, and combustion engines are common sources of mechanical energy. Faraday's law of electromagnetic induction asserts that electromotive force – EMF or voltage – is created in a current-carrying wire that cuts a uniform magnetic field. This may be accomplished by rotating either a conducting coil in a static magnetic field or the magnetic field that includes the stationary conductor. The desired configuration keeps the coil stationary since drawing induced alternating current from a stationary armature coil is easier than from a revolving coil.

We have described the function of each component here:

The field comprises conductor coils that receive a voltage from the source and generate magnetic flux. Magnetic flux is produced when the magnetic flux in the field cuts the armature. This voltage is the AC generator's output voltage.

An armature is the component of an AC generator that generates voltage. This component is generally made up of wire coils large enough to handle the generator's full-load current.

A prime mover is a component that drives the AC generator. A diesel engine, a steam turbine, or a motor might be used as the prime mover.

A stator is a type of generator.

The flux linkage of the armature varies continually as it revolves between the poles of the magnet on an axis perpendicular to the magnetic field. As a result, an emf is generated in the armature. This generates an electric current, which passes through the galvanometer, slip rings, and brushes. The galvanometer alternates between positive and negative readings. This means that an alternating current is passing via the galvanometer. Fleming's Right-Hand Rule can be used to determine the direction of the induced current.