Answer to Question #199513 in Electrical Engineering for Benny

Explain the effects of oxidation on the behaviour and properties of two different metals.

• You should identify specific applications to describe the effects on each metal.

• Use relevant diagrams to support your findings.

The image depicts the isotherm oxidation curves of several steels at 500 and 600 degrees Celsius. Except for AISI 1020, the oxidation weight increases of the various steels were relatively minimal at low temperatures (R.T. - 400 °C). After an initial transitory stage, the steels displayed parabolic oxidation behavior at 500 and 600 °C. AISI 1020 had a larger parabolic rate constant than the other metals, which comprised more than 12 percent. At temperatures of 700, 800, 900, and 1000 °C, similar isotherm curves were produced. Except for AISI 1020, all steels showed parabolic oxidation behavior at these higher temperatures. The latter indicated a parabolic to linear oxidation rate change.

In the MCrAlX system, the Gibbs formation energy of Fe-oxides and the associated equilibrium oxygen partial pressure of Fe-oxide production are similar to Ni and Co oxides (NiO and CoO) in comparison to those elements having a strong affinity for oxygen, such as Al and reactive elements (Y, Hf).O combines with Ni, Co, Cr, Fe, and Al on the coating surface to generate an exterior layer of spinel made up of a combination of oxides at the start of the oxidation. As a result, Fe-oxide-containing spinel is predicted to develop. Reduced oxygen penetration through the exterior oxide layer should result in a decreased partial pressure of oxygen at the oxide/coating contact. 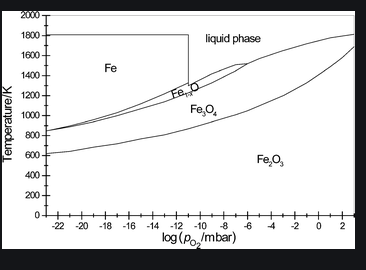 New on Blog
APPROVED BY CLIENTS
This company is an excellent solution if you are overwhelmed and need help with assignments. Would definitely rate the work ***** out of 5.