Answer to Question #233527 in Chemical Engineering for Lokika

Draw the flow sheet and explain the manufacturing of sugar from sugar cane.

The following points highlight the six main steps involved in manufacturing cane-sugar. The steps are: 1. Extraction of the Juice 2. Clarification of Juice 3. Concentration and Crystallization 4. Separation of Crystals 5. Refining of Sugar 6. Recovery of Sugar Molasses.

Step # 1. Extraction of the Juice:

These small pieces in the form of a compact blanket are made to pass through two roller crushers and four sets of mills. After major quantity of the juice has been extracted by the crushers and the first two mills, cold or hot water is sprinkled over the bagasse whereby residual juice gets diluted and can be easily extracted by further milling.

About 90-95% of the juice is usually extracted. The juice extracted is weighed or measured as desired and sent for clarification.

In case sugar is to be extracted from sugar-beet, it is sliced and put in hot water when the sugar present in the beet diffuses out. A number of tanks are used and worked on the principle of counter currents—concentrated solution comes in contact with fresh slices and the exhausted slices come in contact with fresh water and lose last traces of sugar in them. The solution obtained is treated like cane-juice.

Allowed to remain untreated tor some time, it begins to ferment and the sucrose present changes to mixture of glucose and fructose. In order to avoid this, the juice is not allowed to stand untreated for a long time.

There are two main processes for clarification of juice:

Adding milk of lime and treating with sulphur dioxide.

Adding milk of lime and treating with carbon dioxide.

Both processes have advantages of their own. In fact combination of both is made use of to get better results.

The juice is strained to remove suspended matter and treated with 2-3% lime till pH value reaches 7.2 in tanks heated with steam coils.

Heating of the juice helps the coagulation of albuminoids by lime. The vegetable proteins are thus coagulated and the organic acids neutralized. These form a scum on the surface of the juice when the hot juice is transferred to settling tanks called subsiders.

The scum at the surface and the mud settling at the bottom are mechanically removed by passing the whole through a filter press and the clear solution sent on to the conical tanks for carbonation or sulphitation.

A current of carbon dioxide is passed through the defecated juice, which contains unreacted lime and calcium sucrosate (carbonation). This removes the excess of lime as calcium carbonate and decomposes calcium sucrosate.

Very often defecated juice is treated with sulphur dioxide (sulphitation) instead of carbon dioxide which serves the same purpose and bleaches the juice in addition, and produces a juice with much lighter colour. It prevents formation of brown mass by oxidation, and brings about coagulation of gums and albuminoids more effectively.

During the process of sulphitation the solution is maintained neutral. In some cases ‘sulphitation’ follows ‘carbonation’. The juice is filtered again to remove the precipitates.

At present all big sugar factories in India are following double carbonation and double sulphitation process for the manufacture of cane-sugar.

To this concentrated juice sulphur dioxide is again applied. All through this process a strict control is maintained over the acidity of the solution otherwise there will be losses due to inversion, destruction or even discolouration may be there. 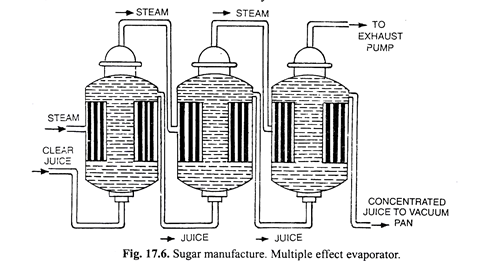 The clear syrupy juice is just boiled in a vacuum pan till formation of sugar crystals begins. The contents of the vacuum pan (massecuite) are taken into the crystallizing tank and allowed to cool slowly when the tiny crystals of sugar grow in size.

The crystals along-with the mother liquor (molasses) are whirled in centrifugal machines wherein the molasses is removed. A little molasses adhering to the crystals is removed by spraying cold water and whirling in the centrifuge again. The crystals are given a little blue colour and dried by dropping through a long pipe through which hot air is passing up and bagged.

Sugar in India is generally put in the market as obtained in the above process. In U.S.A. and other foreign countries it is further refined by dissolving the crystals in hot water and decolourising the solution with animal charcoal or coconut charcoal. It is followed by filtration, concentration under reduced pressure and crystallization as usual.

The molasses still contains sufficient amount of sugar. It is boiled over again to get a fresh crop of crystals. To recover sugar from the final molasses, the latter is treated chemically. It is diluted and treated with hot concentrated solution of strontium hydroxide. Sucrose present forms a precipitate of strontium sucrosate.

This is separated, suspended in water and treated with carbon dioxide when strontium carbonate separates as a white precipitate and sucrose present in the solution is decolourised, concentrated and crystallized as above.

In India sugar is not extracted chemically from molasses although still about 30 to 35% sugar is there. It is now being sent to distilleries where it is fermented and used in the manufacture of alcohol.

New on Blog
APPROVED BY CLIENTS
I REALLY appreciate the details being provided as requested. Both times the assignments have come back earlier than I requested. Having details and not just answers has super helped me understand how to replicate the solution process on other similar problems. GREAT SERVICE!!!