Answer to Question #230298 in Finance for tatto

On checking the cash book with the bank statement, it was discovered that the following transactions had not been entered in the Cash Book:

i) Dividend of RM240 had been paid directly to the bank.

ii) A credit transfer - customs and Excise refund of RM260 - had been collected by the bank.

iv) A direct debit of RM70 for the AVON subscription had been paid by the bank.

v) A standing order of RM200 for TNT's loan repayment had been paid by the bank.

b) Prepare a Bank Reconciliation Statement 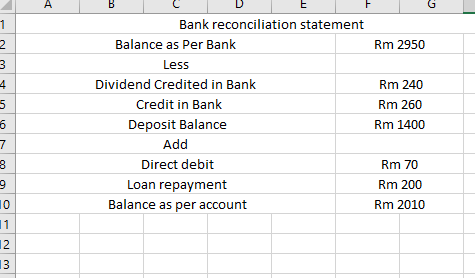 New on Blog
APPROVED BY CLIENTS
The service was great but I had to send the assignment back a few times because some of the directions were not followed. They could pay a little closer attention to detail. They were excellent about fixing it and very fast too