Answer to Question #91952 in Inorganic Chemistry for Gaurav patwal 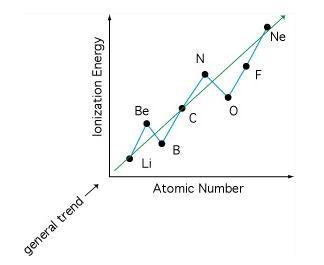 As we move across the second period from left to right, in general, the first ionisation energy increases. But we can see two drops: between Be and B and between N and O. The explanation lies in the electronic structures of atoms.

2p electron and nuclei that reduces attraction between them.

We can see that three p orbitals in N atom are half- filled (px1py1pz1) whereas in O atom one p orbital is fully filled (px2py1pz1). The screening effect is the same for all p electrons, we remove an electron from the same p orbital (px) but for the pair of electrons repulsion exists therefore it is easier to remove electron from the pair. For the next atoms (F and Ne)addition of one more proton has more influence on p electrons than repulsion between electrons of a pair.

New on Blog
APPROVED BY CLIENTS
The service was great. However, I wish the price could be lower.