Answer to Question #84557 in Inorganic Chemistry for anuj kumar

Pyrosilicates are formed when two SiO44- tetrahedra share one corner. The sharing of one oxygen atom between two SiO44– tetrahedra gives rise to Si2O76– anion. These anion can be represented as:

When two corners of a tetrahedron are shared in such a manner that a linear single stranded chain is formed, then the silicates containing such chains are called chain silicates. The single chain silicates have the general formula (SiO32-)n or (SiO3)n2n- . The anions in chain silicates can be represented as:

The chain silicates having single strands are found in minerals called pyroxenes. Examples of pyroxenes are spodumene, LiAl(SiO3)2 and diopside, CaMg(SiO3)2.

Chain silicates can also have double strands. Such double chains are formed when two single chains are linked by sharing of oxygen atoms. They have the general formula (Si4O116-)n or (Si4O11)n6n- . 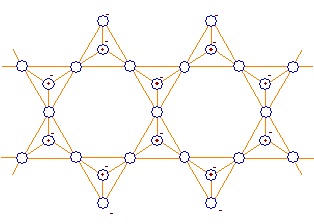