Answer to Question #214366 in Molecular Biology for Moe

When photosystem II absorbs light, an electron excited to a higher energy level in the reaction centre chlorophyll (P680) is captured by the primary electron acceptor. The oxidized chlorophyll is now a very strong oxidizing agent. This reaction splits a water molecule into two hydrogen ions and an oxygen atom, which immediately combines with another oxygen atom to form O2. Each photoexcited electron (energized by light) passes from the primary electron acceptor in photosystem II to photosystem I via an electron transport chain. As electron move down the chain, their lower energy level is harnessed by the thylakoid membrane to produce ATP (by chemiosmosis) called non-cyclic photophosphorylation. Under certain conditions, the photoexcited electrons take an alternative path called cyclic electron flow, which uses photosystem I (P700) but not photosystem II (P680). This is called cyclic photophosphorylation. The chloroplast shifts to this process when the ATP supply drops and the level of NADPH rises. 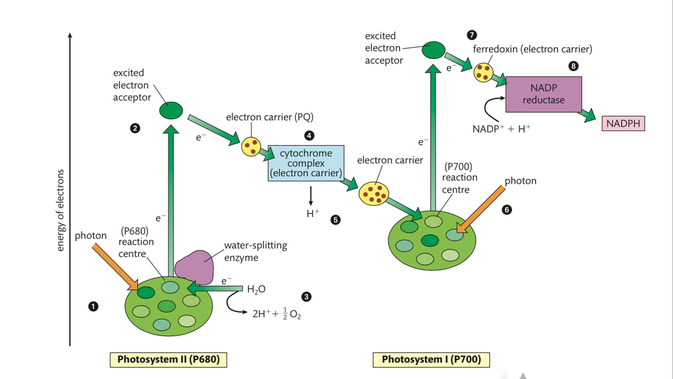 New on Blog
APPROVED BY CLIENTS
The assignment was excellent and I have scored 96 percent.I am very proud and happy with you . Maddy