Answer to Question #267479 in Microbiology for james joint

Explain the process of or the steps involved in retroviral replication.

There are seven steps in the replication cycle of the retrovirus. The first step is attachment, in which the retrovirus uses one of its glycoproteins to bind to one or more specific cell-surface receptors on the host cell. Some retroviruses also employ a secondary receptor, referred to as the co-receptor. Some retroviral receptors and coreceptors have been identified. For example, CD4 and various members of the chemokine receptor family on human T cells (a type of white blood cell) serve as the HIV receptors and coreceptors.

The second and third steps are penetration and uncoating, respectively. Retroviruses penetrate the host cell by direct fusion of the virion envelope with the plasma membrane of the host. Continuation of this fusion process results in the release of the viral capsid directly into the host cell's cytoplasm, where it is partially disrupted.

Step four is replication, which occurs after the retrovirus has undergone partial uncoating. At this stage, the RNA genome is converted by reverse transcriptase into double-stranded DNA. Reverse transcriptase has three enzymatic activities: RNA-directed DNA polymerase makes one Retrovirus attaches to a host cell membrane, penetrates, and uncoats its genomic RNA. Single-stranded RNA (ssRNA) is used as a template for creation of double-stranded DNA (dsDNA), which is then integrated into the host genome. Once transcribed back into RNA, it codes for viral proteins, is assembled into viral particles, and is released from the cell. DNA strand, DNA-directed DNA polymerase makes the complementary strand, and RNAse H degrades the viral RNA strand. Reverse transcription is primed by a cellular transfer RNA (tRNA) that is packaged into retrovirus virions. It concludes with the synthesis of a double-stranded copy of the retroviral genome that is termed the "provirus," or proviral DNA.

This proviral DNA is circularized and transported to the host cell's nucleus, where it is integrated, apparently at random, into the genome by means of the retroviral enzyme called integrase. Following integration, the provirus behaves like a set of cellular genes, while the LTRs function as promoters that begin transcription back into mRNA. This transcription is carried out by RNA polymerases in the host cell. Transcription of the proviral DNA is also the means of generating progeny RNA. Viral proteins are made in the cytoplasm of the host cell by cellular ribosomes.

The next step (step five) is termed "assembly," in which retrovirus capsids are assembled in an immature form at various locations in the host cell. This is followed by an "egress" stage, in which the envelope proteins of retroviruses are acquired by budding from the plasma membrane (cell surface) of the host. Finally, step seven is "maturation." In this step, the Gag and Pol proteins of the retrovirus are cleaved by the retroviral protease, thus forming the mature and infectious form of the virus. 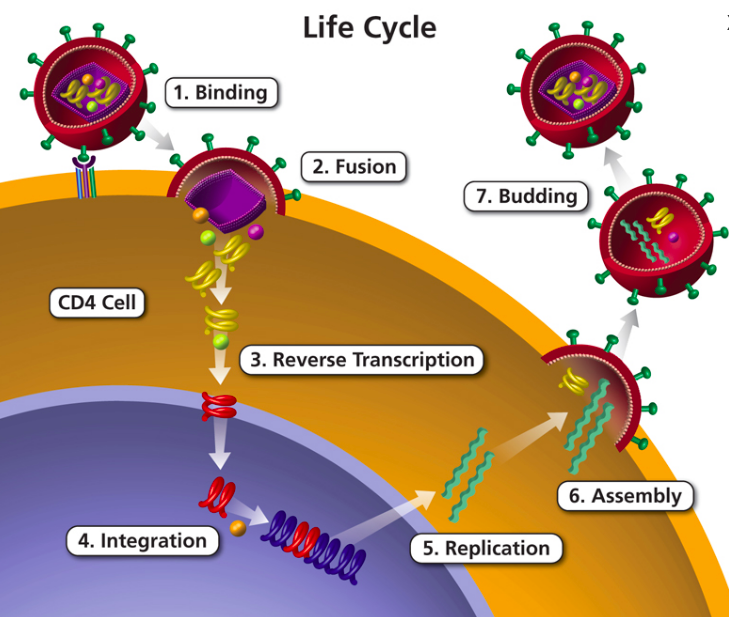