Answer to Question #263597 in Microbiology for Moonlight

The malaria parasite life cycle involves two hosts. During a blood meal, a malaria-infected female Anopheles mosquito inoculates sporozoites into the human host. Sporozoites infect liver cells and mature into schizonts, which rupture and release merozoites. (Of note, in P. vivax and P. ovale a dormant stage [hypnozoites] can persist in the liver (if untreated) and cause relapses by invading the bloodstream weeks, or even years later.) After this initial replication in the liver (exo-erythrocytic schizogony), the parasites undergo asexual multiplication in the erythrocytes (erythrocytic schizogony). Merozoites infect red blood cells. The ring stage trophozoites mature into schizonts, which rupture releasing merozoites. Some parasites differentiate into sexual erythrocytic stages (gametocytes). Blood stage parasites are responsible for the clinical manifestations of the disease. The gametocytes, male (microgametocytes) and female (macrogametocytes), are ingested by an Anopheles mosquito during a blood meal. The parasites’ multiplication in the mosquito is known as the sporogonic cycle. While in the mosquito’s stomach, the microgametes penetrate the macrogametes generating zygotes. The zygotes in turn become motile and elongated (ookinetes) which invade the midgut wall of the mosquito where they develop into oocysts. The oocysts grow, rupture, and release sporozoites, which make their way to the mosquito’s salivary glands. Inoculation of the sporozoites into a new human host perpetuates the malaria life cycle. 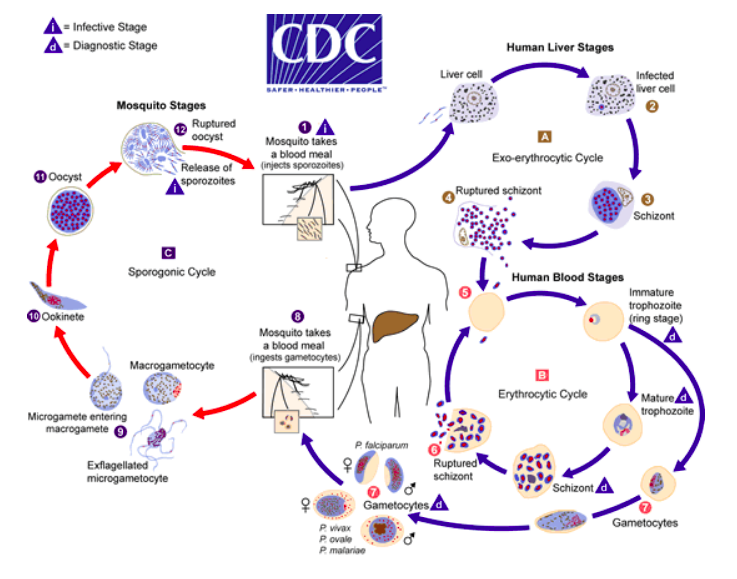 New on Blog
APPROVED BY CLIENTS
The questions were fully explained far better than a teacher.