Answer to Question #263868 in Cell Biology for Moonlight 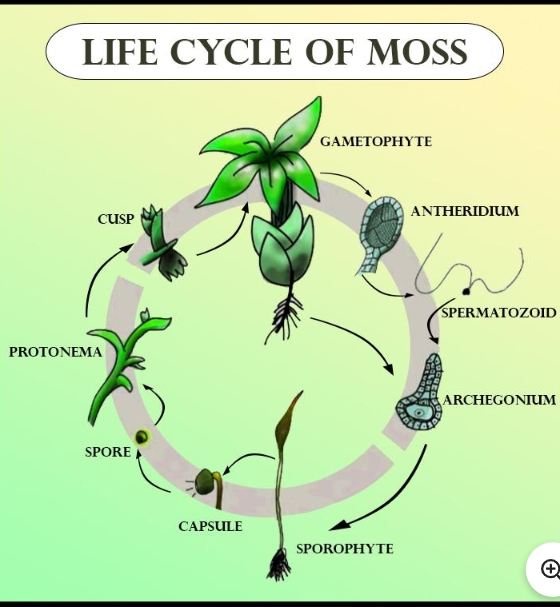 Mosses belong to the division Bryophyta. They are the small, flowerless non-vascular plants that are autotrophic because they undergo photosynthesis. The life cycle of mosses shows alternation of generation. They consist of only a single set of haploid chromosomes. The sporophyte stage is the period when the moss plant has two paired chromosomes.

The life cycle starts with the sore, which is haploid and resulting in the production of protonema. Protonema is the thallus-like, flat thread-like filaments. From this stage, gametophore grows, which then forms stems and leaves. The gametophore is the gamete bearer.

From the tips of the gametophore stems, the sex organs are developed. The female organs are refered to as archegonia (small, flask-shaped cells with an open neck, and male organs are known as antheridia (sperm). In the water, sperm swim towards archegonia, and fertilization occurs. Wind is the main mode of pollination.

After fertilization, the immature sporophyte pushed is out of the archegonial venter and developed into the mature sporophyte. They consisted of seta (long stalk), and a capsule capped cell called an operculum. In the capsule during meiosis, formation of the spore occurs and forms haploid spores. After this, a new cycle begins.