Most often, the question “why is the snow white” is asked by children, yet not all adults know the answer as well. Why it’s white and not red, green or whatever? Moreover, there’s one more question concerning snow. Why is the ice transparent while the snow is white? The answer to both of these questions is connected with two things: the very notion of color and the structure of snow and ice. We’ll start with the first problem. Let’s explain it from physics perspective.

The primary source of electromagnetic radiation for us is the Sun. Sunlight is a mixture of all possible wavelengths. And the color of particular object we see depends on properties of that object to reflect or refract sunlight, in other words, the light waves.

Transparency is a property of material, which allows light to pass through it with minimal scattering. As an example of transparent material we can name glass, water,etc. Often, talking about transparency, people intuitively think of the light transmitted in the direction from the eye to the objects behind transparent material, though in fact, transparency suggests that the light passes from the object to the eye, whereas in the opposite direction the material can be opaque, totally or partially. So we should carefully differentiate between conceptions of transmittance and transparency.

The thing is that the more faces a piece of a transparent material has, the less it is transparent: the light is reflected on and on, and does not pass through to the observers’ eyes. Smooth sheet of glass is quite clear, but a lot of debris – almost none; if we finely crush a piece of glass, it would be just an opaque powder.

Observing the snow under microscope, we can see that it consists of particles of transparent ice. Snowflakes is in fact frozen water, tiny hexagonal ice crystals, made of ice and therefore transparent. Each snowflake is transparent too! By the way, amazingly snowflakes are all different. 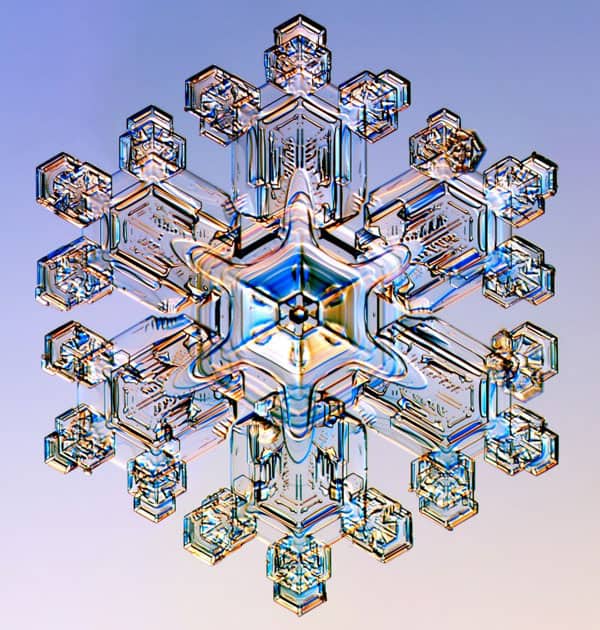 Each snowflake has polycrystalline structure which implies that it consists of small ice crystals, i.e. it has a lot of edges and faces. Moreover, when snowflakes fall on the ground, they cover the surface and are lying randomly. This heap of snow prevent the light from getting through. Each ray of light falling on the top layer of snow is refracted in a large quantity of ice crystals – snowflakes. As a result, crystals-snowflakes “transmit light” till it all goes back, that is, the snow reflects the light completely. And when all of the light is reflected off the object, we see that object as white. If ice were not transparent, snow wouldn’t look white. Basically, the snow is white, because the light of the Sun is white and, which is also important, all this light is reflected and not absorbed. If the rays of the Sun were yellow or red, then the snow would also be yellow or red. At sunset or sunrise, when the sun’s rays are seen as pink, the snow is also pinkish. 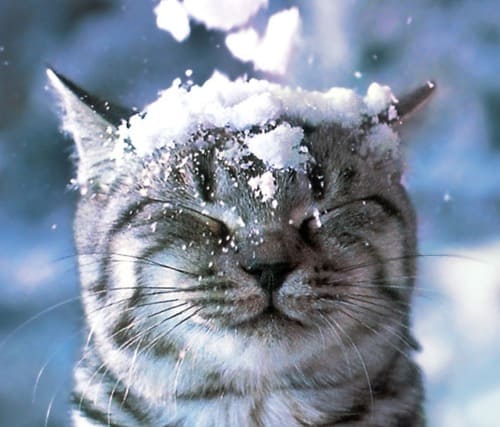 In some special places you can also observe snow of different color. For example, pink snow (also referred to as watermelon snow) puzzled researches for many years. In this particular case such unusual coloration is caused by microscopic organisms. Snow can contain other impurities and admixtures causing it to change color. How do you like green snow, for example?