When we think of virtual reality, the first thing that comes into our heads is a dose of incredible emotions and a piece of mind-boggling entertainment in a form of Oculus Rift or whatever. And hardly any of us under any circumstances will associate it with education. However, the latter keeps up with the times and brings not only games but also a virtual reality into studying process and let’s see how.

Virtual reality (VR), firstly introduced in the early 1990s, represents computer-simulated life. At the end of the previous century, the world witnessed the release of Virtual Boy and several more head-mounted displays produced by Nintendo, Victormaxx, and Forte Technologies that later developed in a well-known  Oculus Rift and lots of other headsets. What is more, there even appeared different extra devices like boards, wheels and gloves that can simulate movements.

The general opinion on such games and applications has divided with supporters considering virtual environment to be precious experience, preparation to enter the world of the future fast-developing VR technologies, and scientific helper, and opponents who complain that these devices have bad influence on human psyche leading to social isolation, mental disorders and even eye accommodation problems. In the picture below, you may find how our eyes see the double picture which is different from the norm in real world thus leading to vergence-accommodation conflict and visual discomfort. 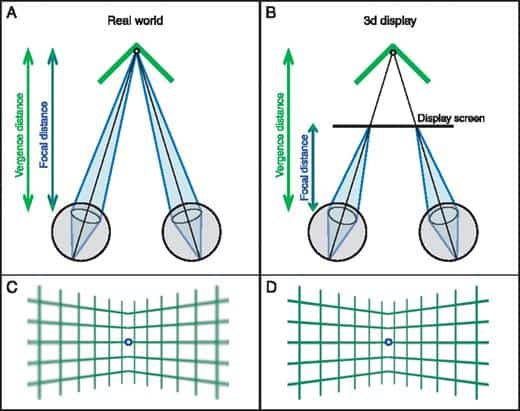 Nevertheless, in recent years the VR headsets are becoming more popular if not to say mainstream and people are no longer surprised with an effect of presence in any fantastic world. We can even cheaply buy the carton box online and it will immediately bring us to the virtual world with a help of an app on our smarties.

As long as people keep perceiving VR as an ordinary tool, chances are we are going to get used to it and will face it in many aspects of our everyday life. And, interestingly, the first sphere to undergo changes is education, where VR classrooms have already been proposed by Google. Also, many universities start discovering new learning methods by applying virtual environment in special VR labs and here’s how they are going to work:

All these practices are told to teach and enhance coordination, motor and cognitive skills, boost memory and attention. And not only students benefit from it, but teachers also. They improve qualification by training with the virtual audience of different ages. Who will also get advantages from VR classrooms are people who cannot attend lectures or are not able to enter college or university as there is a high possibility of online virtual courses. So, VR isn’t actually that bad in reasonable amounts. And now, take a look best VR headsets and choose one for yourself as you may really need it very soon. Just remember to control your movements 🙂