The Canadian company D-Wave has demonstrated the first operating quantum computer Orion. Thus, the actual quantum calculations became possible for tens of years earlier than it was previously planned. 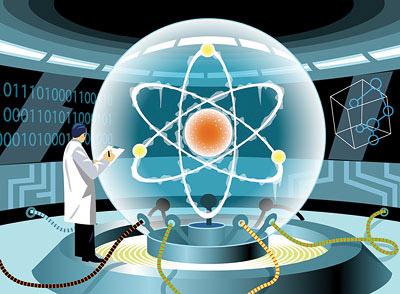 What is a quantum computer? For the layman it is a computing engine before which a conventional computer is like abac prior to the time of computers. And, of course, it is something very far from reality.

Traditional computer systems, one of which originators was IBM, are based on logical elements that can be simultaneously in only one state, interpreted, for example, as “0” or “1”. The future of computers – quantum calculations (the idea of a quantum computer was first suggested by American physicist Richard Feynman and formulated in 1980 by the Soviet mathematician Yu. Manin) – is based on quantum bits (qubits) that can simultaneously be in “0” and “1” states. Such their property has been called “superposition”. Thus, the computer system of two qubits can perform four calculations simultaneously, of three qubits – eight calculations, etc. Generally, an increase in the number of computational qubits will improve computer’s performance.

The superposition principle is easily illustrated by the example of a well-known electron. An electron has a certain intrinsic characteristics, called spin. An electron can be in two states – “spin up” and “spin down”. In accordance with the principle of superposition it is in both states at once, each of which is present with its probability (these probabilities are not necessarily equal, but the sum of them is always 1).

Our life experience suggests that in the surrounding macroenvironment there is no superposition: a cup of coffee is always either the left or right of you, and a desk lamp is always either lit or not. In a microenvironment another strange principle operates – any measurement made on the particle, has irreversible effects on it: the superposition of states is only possible as long as no measurement is made. Once we “know” that the electron is, for example, in the state of “spin up’, the superposition disappears.

The main part of any quantum computer is a quantum register. Prior to entering information into the computer all the qubits of the register must be brought into the main basis states (the so-called initialization operation). Further, each qubit is subjected to selective exposure (with impulses of the external electromagnetic field or otherwise), and the whole register turns into a superposition of basis states.

The speed of quantum computers is high. Consider the following example. Let’s say you want to perform some action on each of four possible numbers in the register of two bits on the conventional computer. This would require 4 performed sequentially steps as only one of four possible numbers is recorded in two conventional bits at a time. We have to go through them sequentially, and perform the desired operation on each. In a quantum computer register of two qubits, the problem will be solved in one step, because the action is performed immediately on all the numbers that are simultaneously stored in the register. This is called “quantum parallelism”. That is, quantum parallelism can make some calculations much more efficient in comparison with calculations on a conventional computer.

But let’s back to Orion, which is able to hold 64 thousand transactions at the same time. Its register consists just of 16 qubits. Then the information is processed by a quantum processor that performs a sequence of quantum logic operations. The result of data conversion at the output of the computer is a new superposition of states, which can be further converted to a form suitable for further use.

The rivalry era between the quantum and conventional computers has not come yet, because the advantage of the quantum calculator becomes significant only if it consists of at least 1000 qubits. Today, there is no question of thousands: the record is owned by IBM, which succeeded in increasing the period of steady state of a quantum bit. It is now existing about 100 microseconds that is enough for signal processing. Until now, the main problem of development of new generation of computers was the instability of quantum bits (qubits). The reason of their modifications is not only in external factors, but also in the fact of their monitoring. So the creation of a “qubit”, firmly integrated into the environment can be called a breakthrough.

Another advantage of a superconducting qubit, developed by IBM engineers in collaboration with Yale University scientists, is that it can be produced using technology of conventional electronic chips. Consequently, there will be no problems with its mass production. In the case of creation, quantum computers will be a real revolution in the world of computer technology, for a quantum computer of 250 qubits will store more information than there are particles in the Universe.