Electromagnetic waves that carry the radio signal move with the giant speed – the speed of light, which equals to 300 000 km/s. Here, on Earth we almost don’t feel the delay in the radio signals transfer. But while the reply from the Moon will come to us in half a second, the other one from the Mars takes about six minutes. Moreover, when the distance from the transmitter increases, the radio signal decays rapidly. So, what can we do with this? Fortunately, it is rather difficult but still solvable.

We know that the data transfer becomes slower as the spacecraft moves away from the Earth. For example, the “New Horizons”, flying past the Jupiter, transfers the data at the rate of about 38 kbit/s, and when it approaches to the Pluto the data rate is decreasing to 1 kbit/s. The main parameter of any communication system is the data rate. The data rate is determined by the ratio of the amplitude of the signal to the noise. The noise arises in the equipment of receiver and transmitter due to the heat motion of the charge carriers. 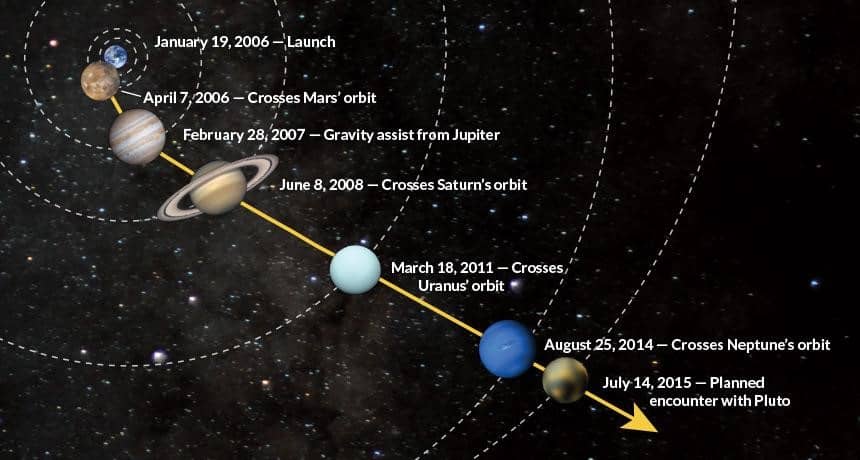 The noise can be filtered out statistically due to its random nature, which causes the equally probable flow of the current in the antenna in one direction and then in the other. Then, averaging of the current for a long time will give a zero noise contribution. But with decreasing of the signal to noise ratio it is necessary to increase the time of averaging, needed to filter out the noise. Today, we transmit the data in digital form (the sequence of 0 and 1 or bits). The worse signal/noise ratio means that more time is needed to transmit each bit of data. In other words, if we try to force the data transfer the messages from the spacecraft will be received with errors. Therefore, as the spacecraft moves away from us its signal becomes weaker and the data exchange rate declines.

However, we can increase the data rate if we use an optical radiation instead of radiowaves. The wavelengths of the laser radiation are 10.000 times shorter than in the radio range, allowing data to be transmitted across narrower beams. Therefore, the divergence of the laser beam is significantly less. This reveals the possibility to increase the data rate at a lower power consumption. It will be clearer if we consider a simple example. Let’s suppose we have two transmitting sources: a 2 meters in diameter radio telescope, operating with radio band waves with length 3 cm, and another source, transmitting to space probe a LASER radiation with length 600 nm and initial beam diameter 5 mm. Then, using a Rayleigh criterion, we can roughly calculate the cross-area of a signal transmitted from the Earth to Jupiter (for instance). Here are the results: in radio band, we have a splash with radius equal to 1000 Earth diameter; using LASER radiation, the radius of splash will reduce to only 10 diameters of Earth. Which is a pretty good result!

An example of a space laser communication is the Lunar Laser Communications Demonstration (LLCD). In autumn 2013, the data were transmitted at a rate of 20 Mbps by infrared laser from the ground terminal on the Lunar Lasercom Space Terminal that located at about 400.000 km in the orbit of the Moon. Then the data were transmitted from the Lunar Lasercom Space Terminal to the ground terminal at a rate of 622 Mbps. Even for the rate of 20 Mbps it is 4800 times faster for such distance than can provide the best radio frequency system.

A ground terminal was located at New Mexico and as a signal source used four 15 cm transmitting telescopes, another four 40 cm telescopes were used to receive the reply. The total transmitter power for this system was 40 watts. The four telescopes are needed because the turbulence in atmosphere can bend the light and this increases the chance that at least one of the laser beams will interact with a receiver on the Lunar Lasercom Space Terminal. Further, the laser beam is collected by the slightly narrower telescope and then focused into an optical fiber. The signal in the fiber is amplified about 30.000 times. Then a photodetector converts the pulses of light into electrical pulses that are in turn converted into data bit patterns that carry the transmitted message. From the 40 watts signals sent by the transmitter, less than a billionth of a watt is received at the Lunar Lasercom Space Terminal, but this is enough to achieve error-free communication.

We’re impressed by this technology, but this is only a first step. Let’s hope, in the nearest future, we will use such space laser communication technologies to maintain the communication between the Moon and Mars, or between the Earth and far distant mine colonies in the Kuiper Belt…