Today the Montessori name is known not only by teachers, but by many parents. Many people tend to study in educational institutions on Montessori’s system; the number of her fans is not decreasing, though this concept cannot be called modern. Italian Maria Montessori in many ways was ahead of her time, becoming an innovator, a unique teacher who changed the lives of many children. 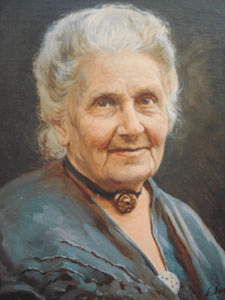 At home, she became the first woman doctor, but she not just treated mentally retarded children, she gave them a great opportunity to enjoy a full life. This talented woman discovered the relationship between the development of fine motor skills and speech. She came up with a variety of exercises and games, where children learn about the world of touch, through the senses. The qualitatively they do it, the better they start talking. Surprisingly, children with diagnoses-verdicts began to read, write and speak intelligently earlier than their quite normal peers. These results led to the creation of a new system of education.

What is the system?

The main principle of the Montessori teaching is the child’s individual path of development. Children are not comparable, their success does not equate to some standards and indicators. According to the system – every child develops differently; the environment of his development is specially prepared. In fact, the teacher acts as a catalyst for development without explicit control function. The main motto of the system is: “Help me to do it myself”.

Montessori system is fundamentally different from other training systems due to the teacher’s position. The teacher is an assistant, who teaches the principles of work, watches the results. But he/she does not dictate the pace of work, does not impose own demands. Child acts as convenient to him. Independence is one of the core values of the system.

It should be understood that the teacher is not an outside observer, whom the children can ignore. The teacher teaches to work with didactic materials, shows a scheme of action, which then adhere to children. But the task they choose for themselves, as well as the pace of work.

This is the main tool of the system. Montessori created a new didactic material, which includes a variety of objects: cylinders, liners, blocks, frames for fastening buttons and lace, frames with slots, grain, etc. Children are not only working on the development of tactile sensations, but also can produce self-control. The principle: you do not get the desired results as long as you do not do it right. And the kids see their mistakes; make new efforts till it will be achieved. Thus, Montessori shows that the foundation of learning is the development of sensor systems. In order training of the senses to be most effective, the system offers to eliminate all the distractions. That is, if there is an exercise in the development of touch, the child is blindfolded.

No desks! Montessori rejects rules familiar to us as a desk study and general restraint and discipline in the classroom. Children can sit on the mat, or work at their small table. This loosens the child, creates necessary personal space. Sometimes that is not enough of didactic materials for each child, while the children are suggested to make agreement. That is, no one decides instead them, they are given a problem that should be decided by them. And this is no accident: it is assumed that is how children learn to communicate, become more contact and socialized.

So the climate of the classroom looks like a family atmosphere: here each have a private space, suppleness and lightness are valued and stable good relations between the participants of the educational process are maintained.

Exercises on these lessons are practical. Children learn to care for themselves and do that often parents do for them. They lace shoes, buttoning, serve table, peel. But no teacher does it in sync with them; the teacher says that child can handle it. Proponents of the system say that through such approach the free individuals grow of the students who are not afraid to make decisions and are able to be open to new knowledge and social activities.

Even the language development cannot be without sense-oriented exercises: child draws letters in small rump, encircles the rough characters, learns some sense of texture and recognize letters. Such tool as mobile alphabet is widely used.

The principle of the prepared environment operates: the child lives and works in the area where everything is ready to learn – his account, arithmetic, various mathematical operations and etc. Knowledge comes not in the abstract, but are related to the practical needs.

The sensitive periods are favorable for the development of various skills. It is possible to calculate the age at which children should be learnt to draw, and at which – to play music. For example, from two to four years you should teach the child to be tight and to have the desire for order. From two and a half years to six the standards of behavior in society are better absorbed. Musical development is optimal in age from two to six years, motor – from birth to three and a half years.

Pros and cons of Montessori system

The main advantages of the system:

–  The individual path of child’s development;

–  Providing the freedom to choose activities and assignments;

The disadvantages include the lack of attention to the game as the main form of preschoolers development, underestimating the role of the teacher, the contrast to the rest of sensory (cognitive and language development).

Today Montessori system operates not only in preschool; it is present in fragments in many schools. If you don’t have an opportunity to place a child in a group of Montessori, take on board the systems postulates. Many activities the parent itself can learn with the child.