When we deal with the complex electric circuits (like T-circuits), we use some mathematical techniques to find the current and voltage drops in the circuit. It’s not as difficult as it may seem at the first sight. In this post, we will tell you how to analyze the circuit with the help of the Kirchhoff’s Circuit Law.

There are two simple rules about the voltage and the current in the closed electric circuit. The first one, called Kirchhoff’s Current Law, states that the sum of the currents flowing into a point (or node) in a circuit equals the sum of the currents flowing out. The second, Kirchhoff’s Voltage Law, states that the sum of the voltage drops around any closed circuit is zero. Let’s now figure out what a branch, a node and a loop mean. The branch is simply the component of the circuit such as the resistor or a battery. The node is the point of connection between two or more branches. And, finally, the loop is any closed path in the circuit.

Let’s consider, for example, T-circuit in the scheme below: 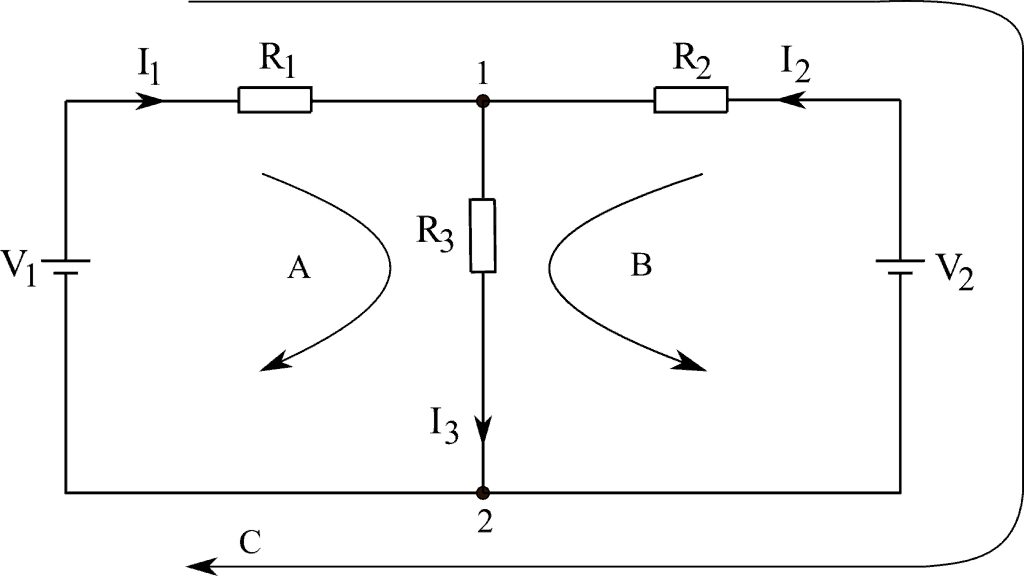 As we can see in the scheme above, this circuit has three branches, two nodes (designated as 1 and 2) and three loops (designated as A, B and C). So, firstly, applying Kirchhoff’s Current Law to the nodes 1 and 2, we get:

Then, we can apply Kirchhoff’s Voltage Law to the loops A, B and C:

After substituting the numbers, we get the system of equations:

So, as you may see, it is easier than you expected. We are glad to help you with this and other problems in physics, just let us know about them!