Each of us at least a few times per week uses a smart card in transport, a typical power door locker or, so-called, transponder, for an office door or a car. These devices can be considered an essence of the era of radio technologies. Let us speak how they work and where the corresponding technology is used also. 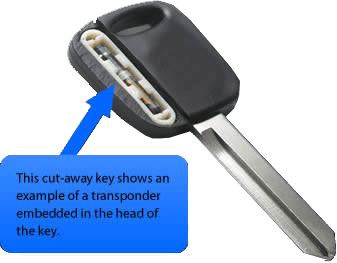 The idea is very simple. There is a transmitter and a receiver. Transmitter emits a special radio wave (stimulated by received signals or by operator’s action), which can be detected and decoded. If the decoded signal is right, then receiver makes the system do some actions: open a car door, for example. This technology escorts us everywhere, where a secure identification is needed, starting from civil and military aviation (friend or foe identification , IFF) and finishing tickets like BahnCards for German railways or cards for any underground. It is called RFID – radio-frequency identification.

The area of RFID technology usage is quite wide. As we have mentioned above, contactless tickets use this technology. In particular, the majority of them use MIFARE chips of NXP Semiconductors trademark (Philips). Modern car lockers can start a car only if both key structure and the radio response of transponder inside the key head are correct.

The contactless technology with radius of detection from a few cm to hundred of meters allows to use RFIDs for tracking goods and distant identification. For instance, chips are sometimes embed into pet’s collars to track them if they are lost or allow to open a door only for your cat, not for cat of your neighbor John. In the same way, goods  are often equipped with RFID devices which allow ещ detect them even inside trucks running along the highway. In these cases, RFIDs are electronic tags rather than security keys.

If you like sport and participate in racing or triathlon competitions, you are already familiar with RFID-tags. Depending on the competition, tags are usually fixed on gym shoes or bangle. When say runners crosses a control area, their result is written in management system. The same bangles are used on music festivals as tickets. And the future of this technology is limited only by engineers’ imagination. 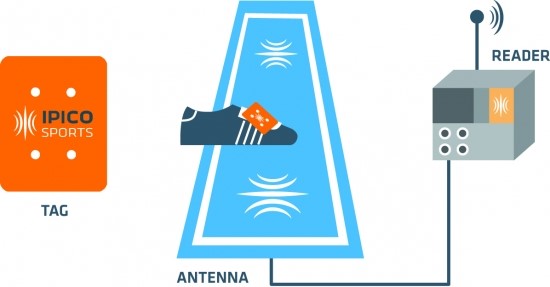 An antenna and microchip hidden inside of any RFID device are also called radio tag. Antenna receives an external signal and microchip prepares a response signal which may contain an encoded information. The size of chips used in practice is less thick  than even the office paper, which allows to embed them in thin plastic cards. The total size of the device is determined by the antenna, which is usually much larger but also may be produced very thin. If you stratify an identification card, the chip can be found somewhere near the center while the antenna is winded around the perimeter, see the scheme and a photo below. 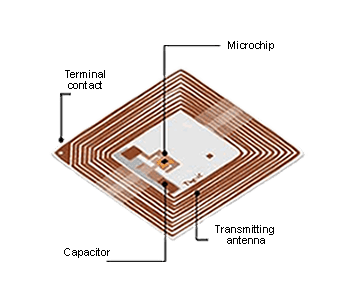 There is a high-frequency wave (carrier) with a given amplitude (practically, from hundreds of kilohertz to hundreds of gigahertz if we speak about the end-user of RFID technology. Also, there is some information represented by a low-frequency signal (modulating signal). When the amplitude of the carrier is changed according to the modulating signal, one obtains the amplitude modulation. This is how a lot of contactless transport tickets and smart cards work when power-independent rewritable memory in the chip contains a number of trips, decrementing after each ticket usage.

Active and passive RFID devices are distinguished. Active ones have a power supply via battery and demonstrate a large area of detection and stronger signals in a noisy background. Passive RFIDs in turn use an energy of currents generated by external electromagnetic fields in the antenna.

Consequently, with emitting a request and getting an answer from the radio tag, a lot of things are possible: a contactless monitoring of cargo, identification of officers, key locking, etc. This very simple idea is used a long time in a variety of fields of technology starting from aeronautics and ending with ID cards of citizenship. Modern RFID tags allow to hide antennas and microchips inside a thin paper or plastic sheet of a comfortable size for a regular usage.  And now you can estimate how many times per day you use them: in supermarket, college, public transport, riding to picnic with friends, or even more?