You may have the universe if I may have Italy

Italy, the country of art, high culture and good taste, for quite a long time, attracts pupils and students from other states. Education in one of the Italian universities is the ultimate dream for many. Italy is one of the four countries (along with France, Britain and Germany), who first proposed the creation of a so-called European Higher Education Area, as appropriate declaration was signed in May 1998 at the Sorbonne. From that moment the process of pan-European harmonization of the different systems of education began, and a year later in Bologna the decision to participate in it has already been signed by 29 states. 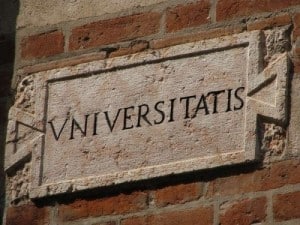 Italian universities are attractive to students of many countries, and this is understandable: in addition to the fact that this land is the cradle of ancient civilizations, the world famous art treasures in its architecture, painting, sculpture, writings and discoveries of musicians, artists, poets, sailors, scholars such as Raphael, Michelangelo, Giuseppe Verdi, Christopher Columbus, Leonardo da Vinci, Antonio Meucci, Guglielmo Marconi … In Italy much attention is paid to scientific research, as in common scientific and applied in a variety of areas (biology, physics, medicine, information technology, etc.).

The educational system in Italy implies private and public higher institutions; any foreign citizen has virtually the opportunity to enroll in one of them. Typically, this requires a certificate indicating successful completion of secondary education, as well as an adequate knowledge of the Italian language. It is noteworthy that the foreign applicants cannot pass examinations for admission to Italian university, but there is a certain quota of seats for students from other countries in every university. Today the university system includes a total of 94 educational institutions, which are divided into 60 state universities, including three polytechnics and 2 universities for foreigners (specializing in teaching and research work in the field of development and distribution of Italian language, literature and culture), 17 officially recognized private universities, and 6 high schools, 11 universities of distance. Cattolica, Bocconi, Luiss, IULM (Institute of Modern Languages) and San Raffaele are worth mentioning among the most prestigious private universities.

– Higher education institutions preparing specialists in the field of psychotherapy;

– The school archives, paleography and diplomatics;

– The military and the police academy schools;

When choosing a university in Italy you should focus not on the prestige of the institution as a whole, but on the authority of your faculty.

Education is paid only after enrollment. The cost of training each university sets itself, it can range from 800 to 3000 Euros per year – at state universities and up to 15,000 a year – in private ones. Low-income (including foreign) students have the opportunity to receive a scholarship (borsa di studio), in which case the student shall be exempted from paying fees.

Despite the possibility of easy enrollment, it should be noted that education in Italy is at a high level, and the majority of students dropping out at the first session. To avoid this, you need to prepare thoroughly in advance before entering. Pass the test of the Italian language, read books on the subjects you intend to study in Italy, any way try to get information on the majors, then later you will be able to boast of a diploma of completed higher education in Italy and find an interesting high-paying job.