The school and education of the Ancient East states were developed in line with specific historical, cultural, moral and ideological values. The human was formed within the rigid social regulators, responsibilities and personal dependence. The idea of human individuality was very poorly considered. The personality dissolved in the family, caste and social stratum. Hence, the reliance on strict forms and methods of education was present.

There were special education frameworks for teaching the younger generation. In this era the pre-literate history period was completed, when speech and the pictographic (patterned) writing as the main means of information transmission from around the 3rd millennium B.C.E. were partially replaced by the actual writing – cuneiform and hieroglyphic.

The greatest influence on the development of educational thought had Confucius and his followers. Methods of teaching in his school involved teachers’ conversations with students, the classification of facts and phenomena, imitation of models. At the core ideas of Confucius is the general philosophical and social education, moral improvement as the main factors of human existence, indispensable conditions for prosperity. Confucius rests on education according to social purpose. Ideally educated person should possess high qualities: generosity, a desire for truth, reverence, accuracy, rich spiritual culture.

The appearance and development of writing is an important factor and satellite in the genesis of the Ancient East school. In the transition from pictographic writing to logography, that conveying not only the general meaning of speech, but the division into individual expressions and words (the Egyptian and Chinese hieroglyphics, Sumerian cuneiform), the writing becomes more technically complex and requires special training. Further development of letters associated with the emergence of the first syllable (in ancient Assyria), and then the phonetic (in the ancient Phoenician) writings led to the simplification and facilitation of literacy teaching, which increased the “productive capacities” of the school.

The first information about the school education of the ancient Egyptians, relates to the 3rd millennium BC. The school and education in Ancient Egypt were called to transfer a child, teenager, young man in the world of adults. The ideal of the ancient Egyptians was considered as a human who is concise and resistant to hardship and the blows of fate. The teaching and education were going in the logic of such an ideal. They reflect the nature of the relationship between women and men who built the family on an equal basis. Therefore, teaching boys and girls was given an equal attention. 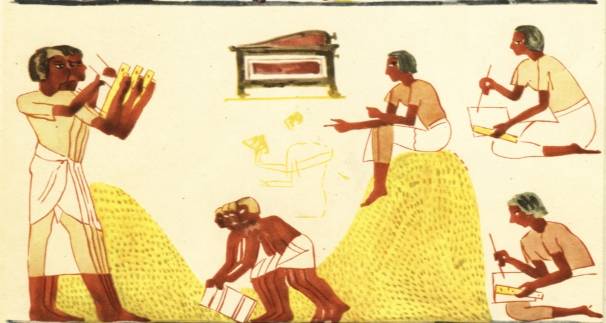 Based on ancient Egyptian papyrus, children were given special attention, since, according to Egyptian beliefs, the sons and daughters could give parents a new life, making the funeral rite. During the preparation for life after death the morals were drawn up and turned to children, which served as a stimulus of the formation of morality and reflect the idea of the extreme importance of education and teaching: “The ignoramus, who was not taught by his father is similar to the xoanon.”

Pedagogical methods and techniques, accepted in Ancient Egypt, corresponded to the goals and ideals of the education and teaching. A pupil ought, above all, to learn to listen and obey. An aphorism was popular: “The obedience is the best of a human nature.” A teacher used to refer to a student with the following words: “Be attentive and listen to my speech, do not forget anything that I say to you.” Physical punishments were the most effective for the achieving such a submission, which were considered as natural and necessary. The school motto was in the words written in the one of an ancient papyrus: “A child has an ear on his back, that’s why he is needed to be beaten to hear.” For literacy, the student needed to memorize at least 700 hieroglyphs, to distinguish between a superficial, simplistic and classical writing.

Moral education in Ancient Egypt was carried out mainly through the memorization of moralizing precepts such as: “It is better to rely on the mankind than the gold in the chest”, “Better is to eat dry bread and rejoice the heart, than to be rich, but know sadness.” Reading, writing and storing such instructions were not easy, as they are portrayed in the language of hieroglyphics that more and more differs from the living speech.

The purpose of education was to prepare for activities that family members were traditionally engaged to. So the family was the basic unit of teaching. Musicians, artisans, priests and so on passed their profession on to children. Fathers-craftsmen sometimes used in teaching children’s toys: models of agricultural implements, mills, forges, etc. Only the military art was beyond a strictly class-specific teaching. Future soldiers were taught to use weapons, special exercises to develop strength, endurance, agility.

Some schools gave information on mathematics, which may be necessary for the calculation of the construction of canals, temples, pyramids, calculation of the harvest, astronomical calculations, used in particular for the prediction of floods of the Nile. Geography was often taught in conjunction with the geometry that the student could learn to draw the plan area. 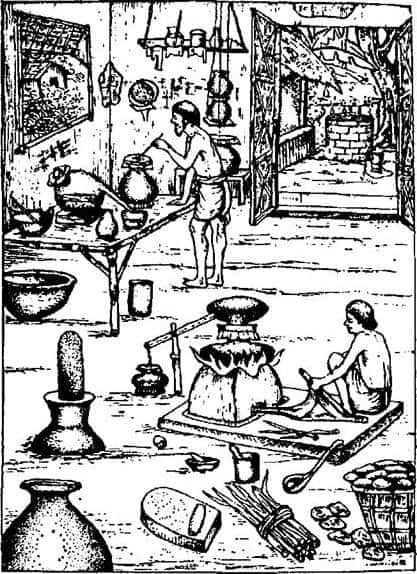 The caste has left a specific imprint on the development of education and teaching in Ancient India. Education and teaching were based on the idea that everyone should develop their moral, intellectual and physical qualities so as to become an organic member of his caste. Brahmins have considered the leading intellectual qualities, the Kshatriyas – the strength and courage, the Vaishyas – hard work and patience, a sudra – humility. A view of the ideal education was also formed (only the highest castes could reach it), according to which human is born for rich and happy life. Education provided for the mental development (clarity of judgment and rational behavior), spirituality (the ability to self-knowledge), physical perfection (hardening, the possession of own body), love of nature and beauty, poise and restraint. The highest expression of moral behavior was considered the promoting the common good.

Regular teaching program was primarily in the retelling of the Vedas, teaching of reading and writing. A few boys got high education. The program of high education consisted of poetry and literature, grammar, philosophy, mathematics, astronomy. The content of higher education at that time was very difficult (for example, zero and calculation with the help of ten marks were first introduced in Ancient India, which are then borrowed by the Arabs and Europeans). Education was held in the open air.