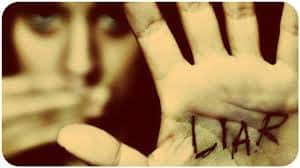 The original (ancient) formulation arises from the story about how Epimenides, a native of the island of Crete, in the heat of an argument said: “All Cretans are liars”. And he heard the objection: “But you yourself are Cretan! So are you lying or not?”

Another mistake is that by liars we call not those who always lie, we call liars those who do it often. Accordingly, even if Epimenides is a liar, it isn’t necessarily that he is lying this time. Again, the proof falls apart where it says: “And so he lied.” Maybe this time he was not lying, but in general, he and other Cretans are liars and lie regularly.

So, the question of Epimenides is solved. However, there’s a strong (modern) formulation of the paradox, which goes as follows. Someone says: “All I’m saying is a lie”. Modern versions are reduced to such a contradiction. If I’m lying, then, saying this, I am not lying. So, saying this I am telling the truth. If I tell the truth, then the statement “I am lying” is true. Therefore, I’m still lying. Whatever the answer to the question – there is a contradiction.

Let the person evaluates each sentence as “false” or “true”. He says the phrase: “I am lying” and immediately evaluates it as false. But the expression evaluation is also false, isn’t it? The estimate of previous estimate is false again.

Bertrand Russell believed that such reasoning is similar to schizophrenia. In the sense that the man bifurcates: one still says the phrase, and the other has already estimated it. In addition, we can say that there is the third, which ran even further forward and evaluated estimate. And so on.

As a result, we either recognize Epimenides schizophrenic, who both agree with himself and disagree. Or we recognize that this phrase actually hides a lot of phrases, and each of them has its truth or falsity:

I am lying = true

I am lying = false

In both cases, the correct answer to the question of the paradox states “in some ways liar is lying, and in some ways he’s telling the truth.” Solution is reduced to admittance that not every phrase can be called completely false or completely true. First, you should make sure that it is only one part of meaning. Otherwise, some parts may be false, and others – true.

Mathematics has many variants of logic for measuring the truth. Sometimes it is enough to use a two-valued logic. And sometimes we need higher accuracy, and apply more sophisticated methods. The selected method determines the accuracy of the result. But basically all the “logics” agree on one thing. We cannot answer uniquely on the question of the liar because the question itself contains in fact not one, but several issues. If we take this fact into account, the formal logic will give a clear answer.