2019-10-14T09:07:53-04:00
Answers>
Economics>
Microeconomics
Question #96489
Use appropriate economic frameworks and/or models including the Production Possibility Frontier (PPF) to graphically describe and discuss the potential implications for economic costs, economic growth, allocative efficiency in the West African economies producing cocoa beans from proposals made in the extract above. Discuss with graphical explanations how these economies would be affected by the efforts to move their production high up on the value chains of cocoa bean cultivation to primary and secondary products including the branding and marketing of those products. In your discussion, present real economic data (e.g. www.tradingconomics.com or any other credible economic and data sources) as evidence on how these economies would potentially be affected in terms of indicators including their relative GDP sizes, local employment opportunities, etc., in the process of internalising the processes that are located high up in the cocoa bean value chains.
1
Expert's answer
2019-11-22T11:03:28-0500

West African economies, producing cocoa intend to move their production up the value chains to producing primary and secondary products rather than simply selling coffee beans. They also intend to brand and market cocoa products and sell them directly to various exports destinations. The decision will have far reaching implications on the countries’ economic costs, economic growth, and the allocative efficiency as demonstrated in the graphs below. OECD figures show that West African countries produce more than 150,000 tons of cocoa beans as of 2017. Assuming that their intention to move cocoa production up the value means more specialization to enhance quality, they would have a production possibility frontier like the one shown below:

A PPF curve shows the possible amount of a good or combination of goods that the bloc can produce given its current resource endowment. For there to be maximum productivity (at the highest point of the y-axis), the cocoa-producing countries must choose to specialize in coffee production. The overall effect is economic growth in terms of real GDP in the event that the economies create more employment opportunities through the processes involved in the value chains.

Allocative efficiency refers the given mix of goods that the cocoa-producing countries desire to produce. Now, if they desire to maximize cocoa production along the value chain, they may have to create a preference for the combination of goods to produce with cocoa. The PPF is used to indicate the allocative efficiency points on its graph in case countries produce cocoa using a new value chain in combination with a hypothetical good such as wheat or coffee.

All points along the graph represent the points where the cocoa-producing countries would achieve allocative efficiency in favor of coffee. 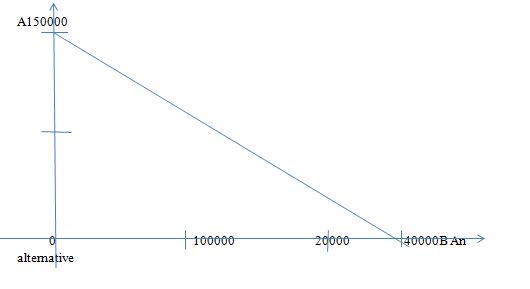