Answer to Question #95284 in Microeconomics for Tina

To solve these problems Eskom is in contact with the National Energy Regulator of South Africa (Nersa) regarding the next steps. In the meantime, Eskom's action plan rests on three main prongs:

2) Signing new contracts. While 14 new suppliers are on the horizon, some will only kick in next year. Phasiwe says six suppliers have been willing to start with immediate effect, with four starting this month or early next month.

3) Relying on diesel as an interim measure to supply power.

First two solution can be reflected on this grah: 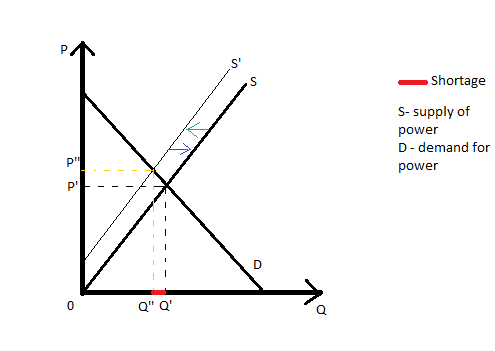 The third solution can also be shown on the grah above, but as using disel will increase the cost, supply curve won't be able to be at the same possition.

New on Blog
APPROVED BY CLIENTS
Great service but sometimes the evaluation is too high compare to previous assignments and the difficulty level of the question. being similar.